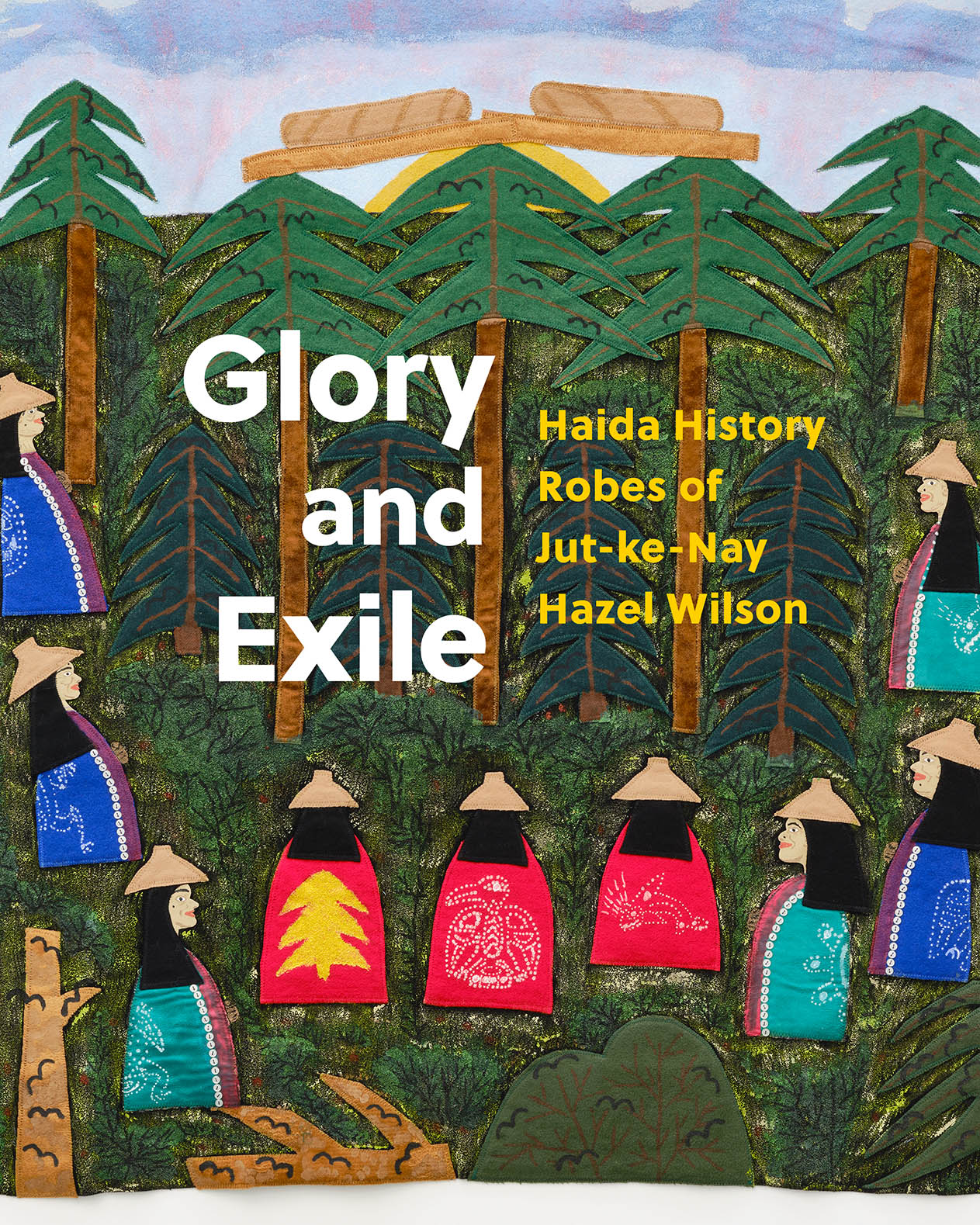 Through a series of fifty-one large “story robes,” Jut-ke-Nay Hazel Wilson shares a grand narrative of Haida origins, resistance, and perseverance in the face of colonialism, and of life as it has been lived on Haida Gwaii since time immemorial.

“Hazel was a matriarch, artist, and Storyteller. Thomas King once wrote, “The truth about stories is, that’s all we are.” To experience Hazel’s work is to learn a story within a story: the past as taught by her Elders; the life she herself experienced within these narratives; and a glimpse of our storied future, which we will build by upholding our own responsibilities to Haida Gwaii, the Supernatural, and each other.” 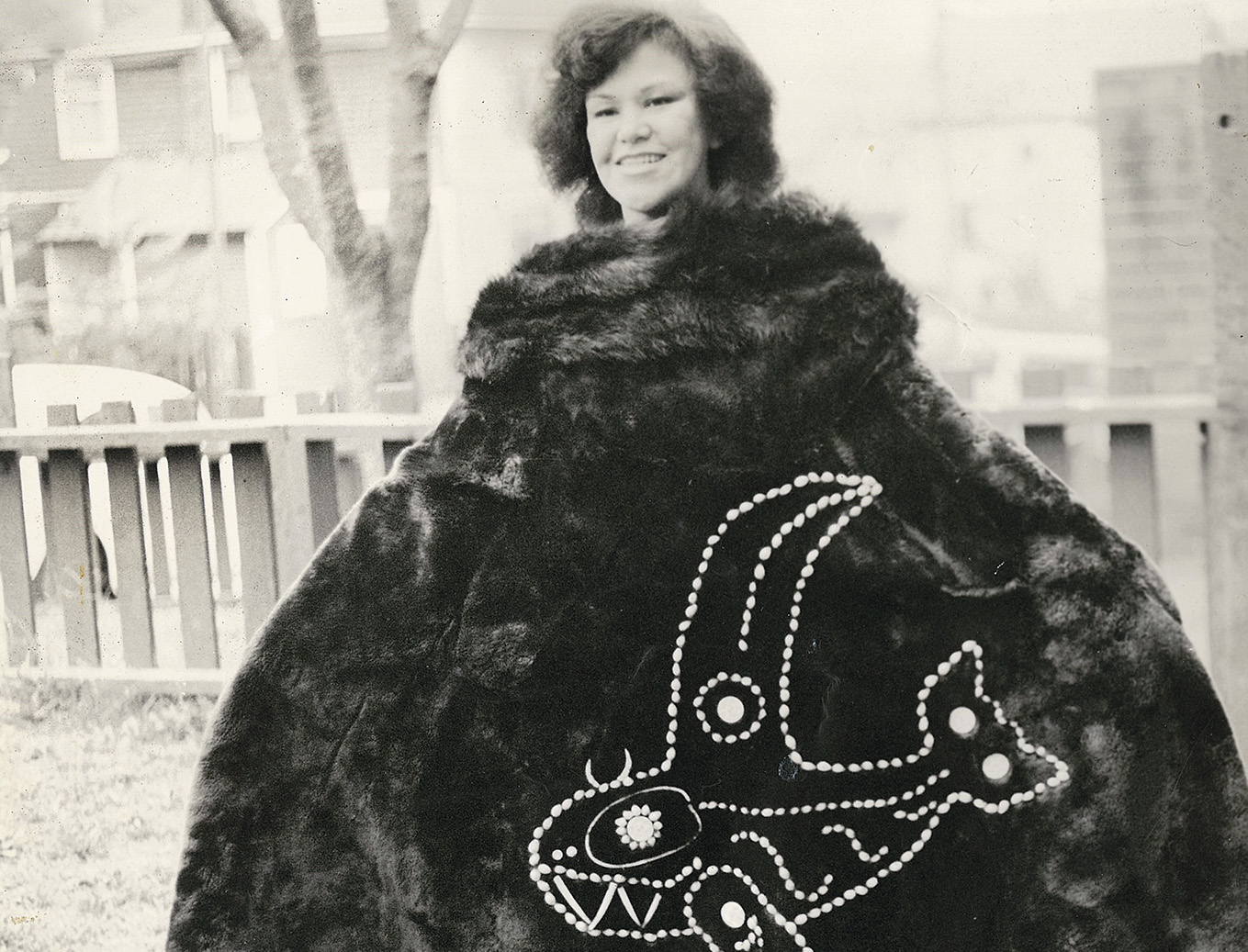 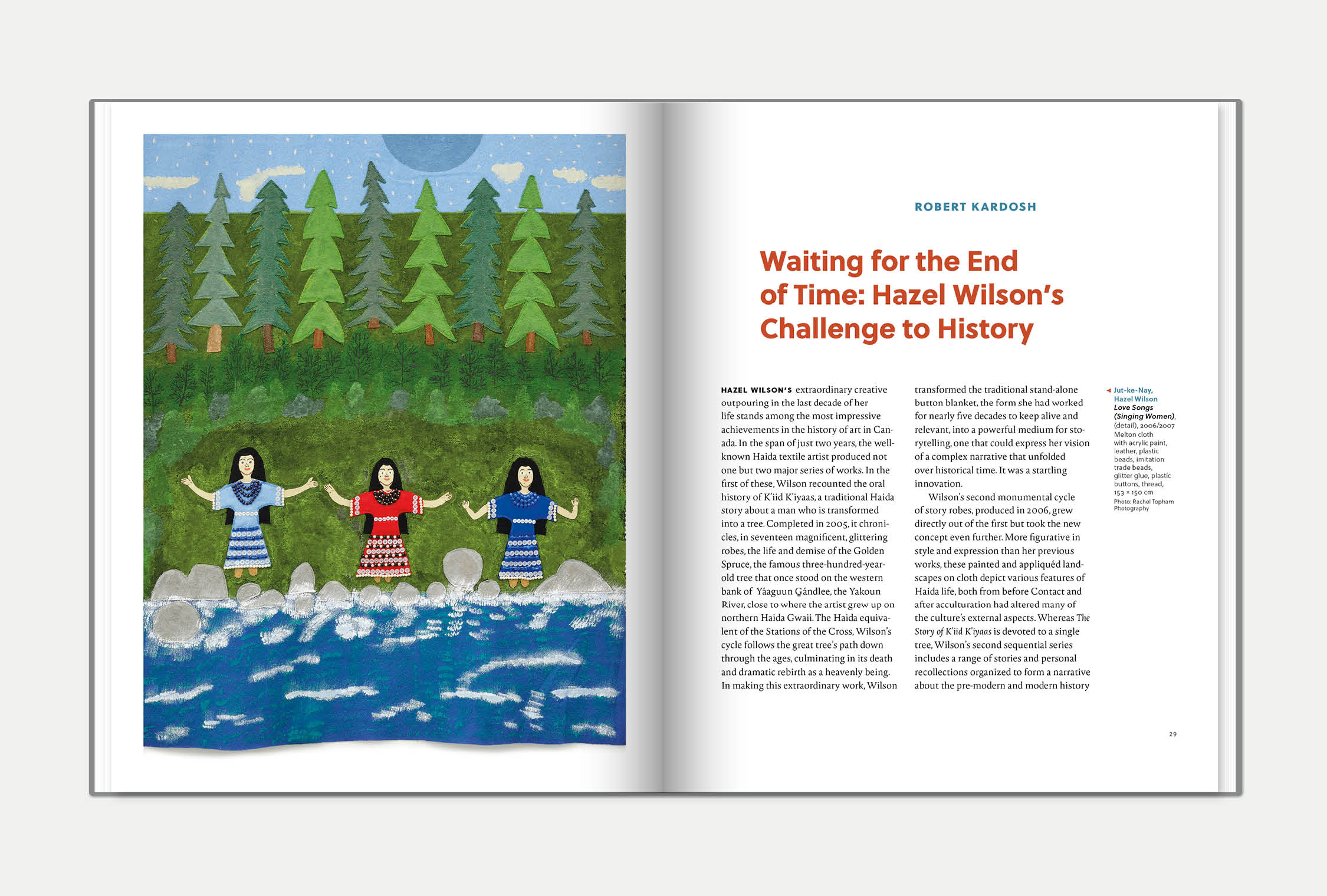 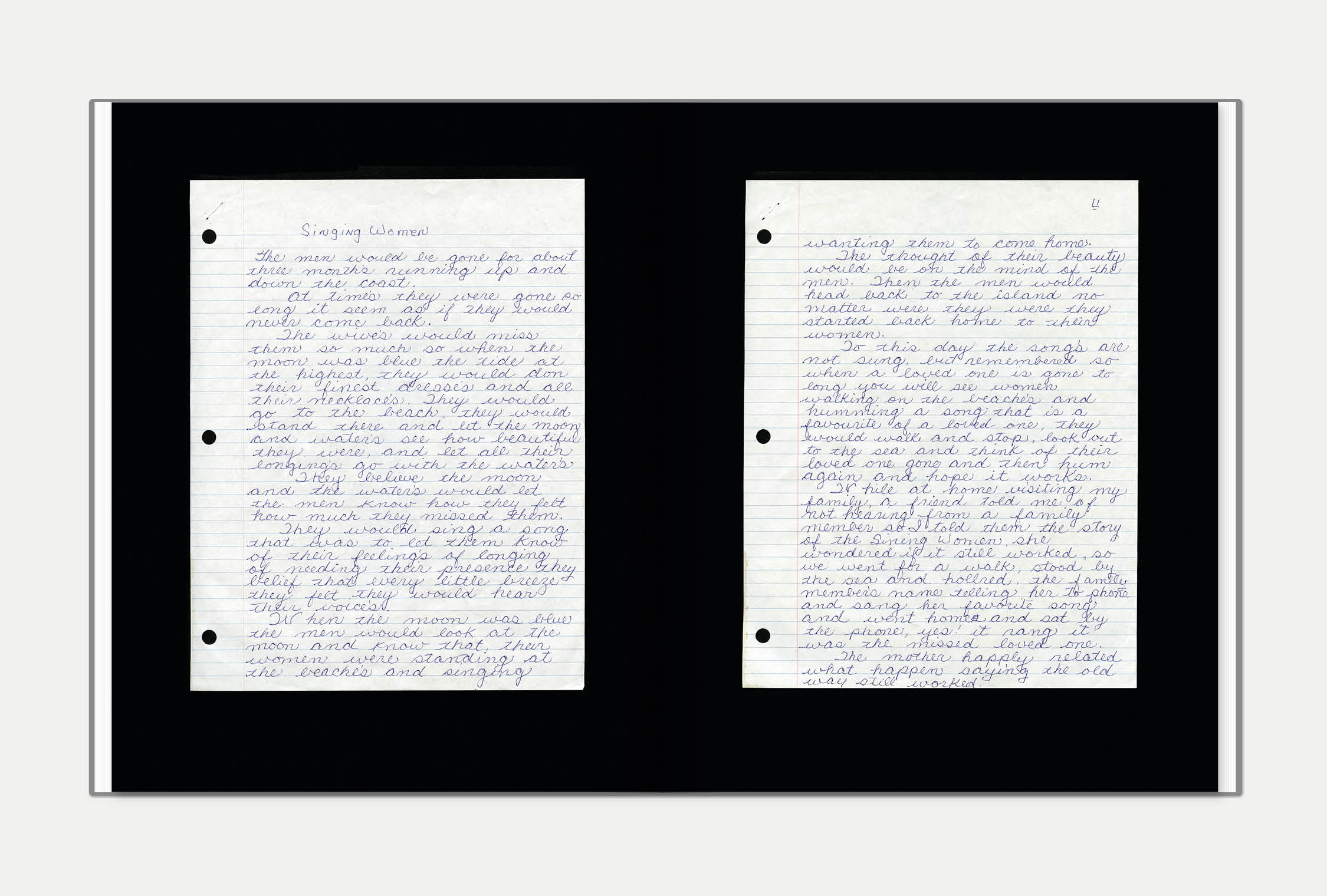 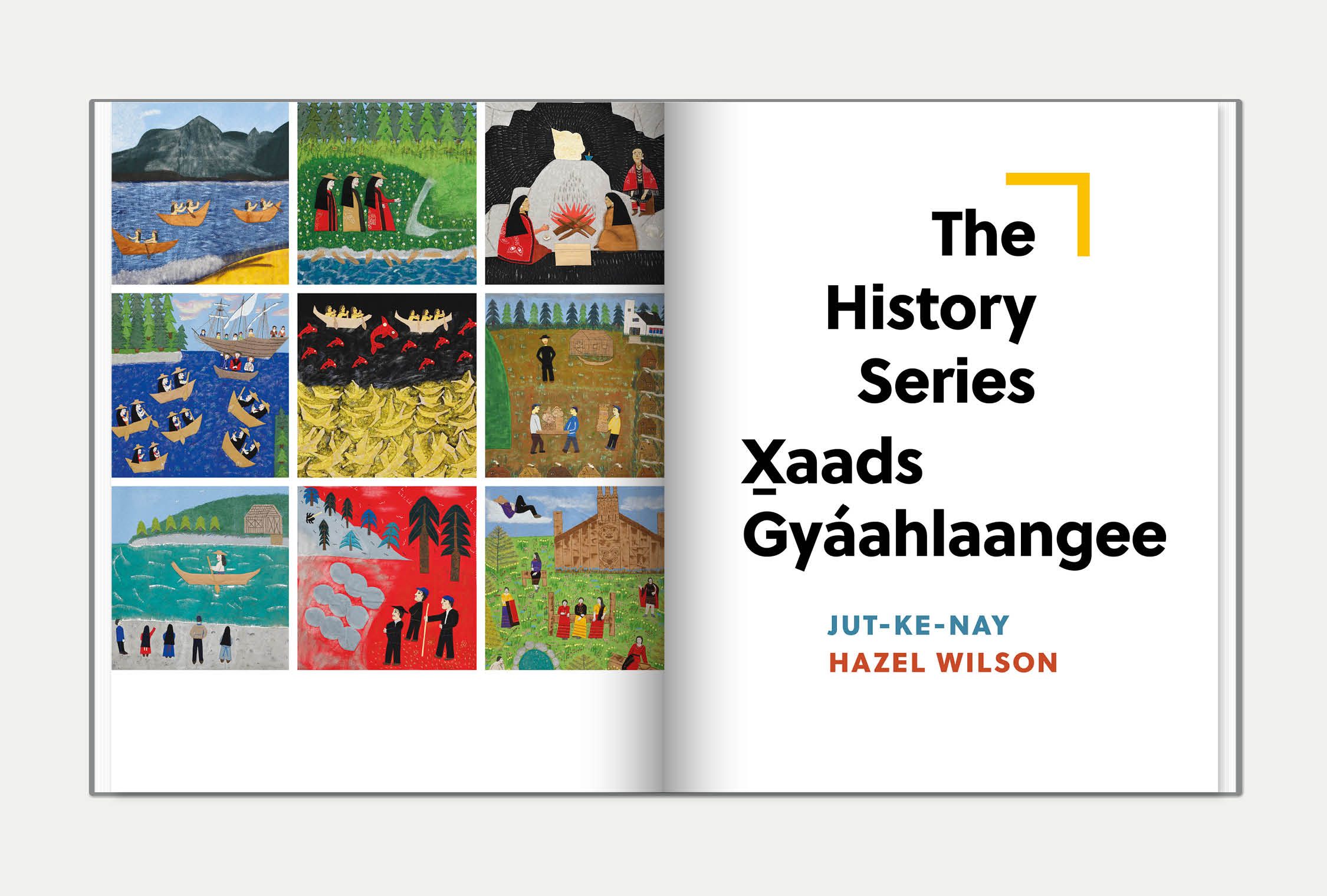 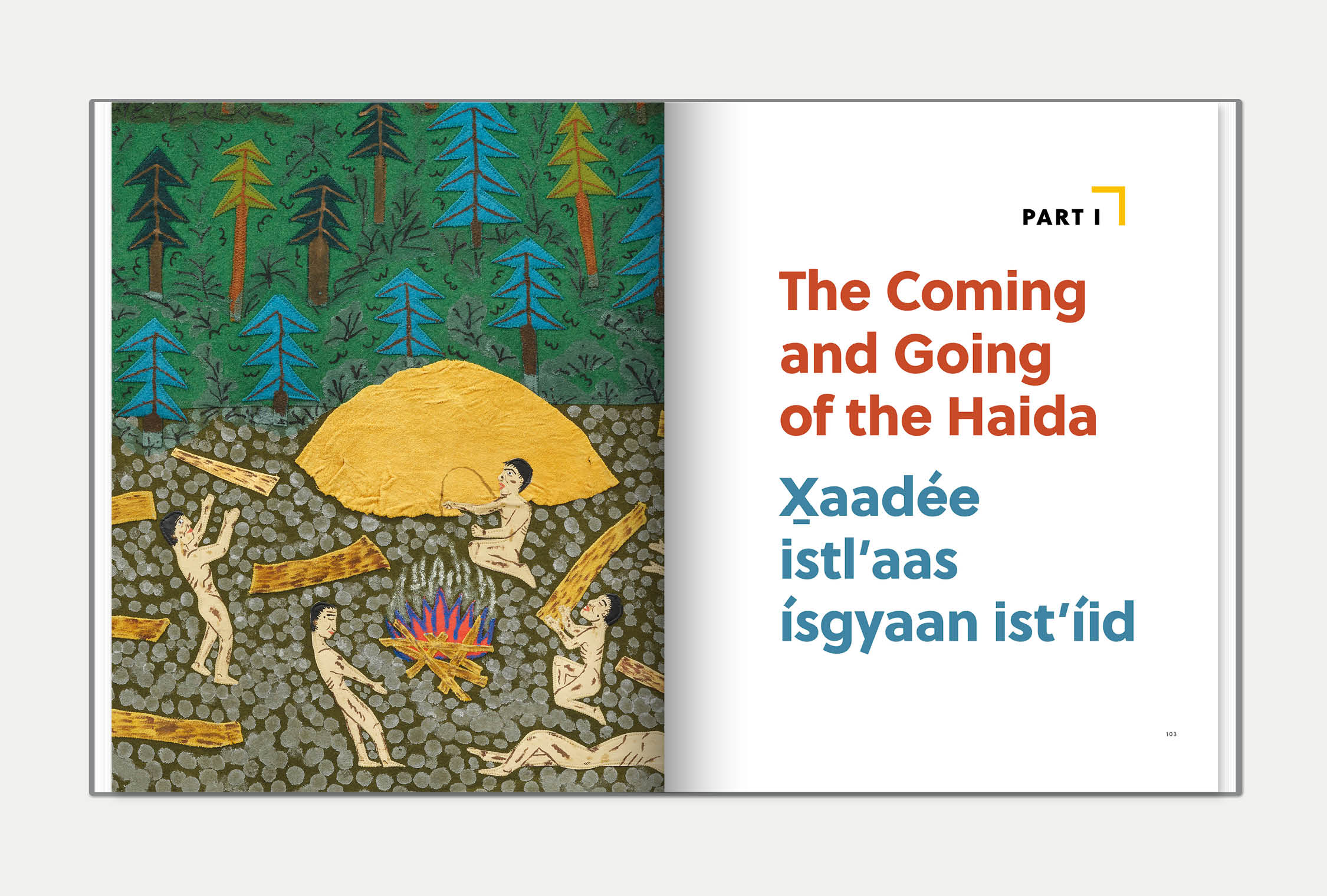 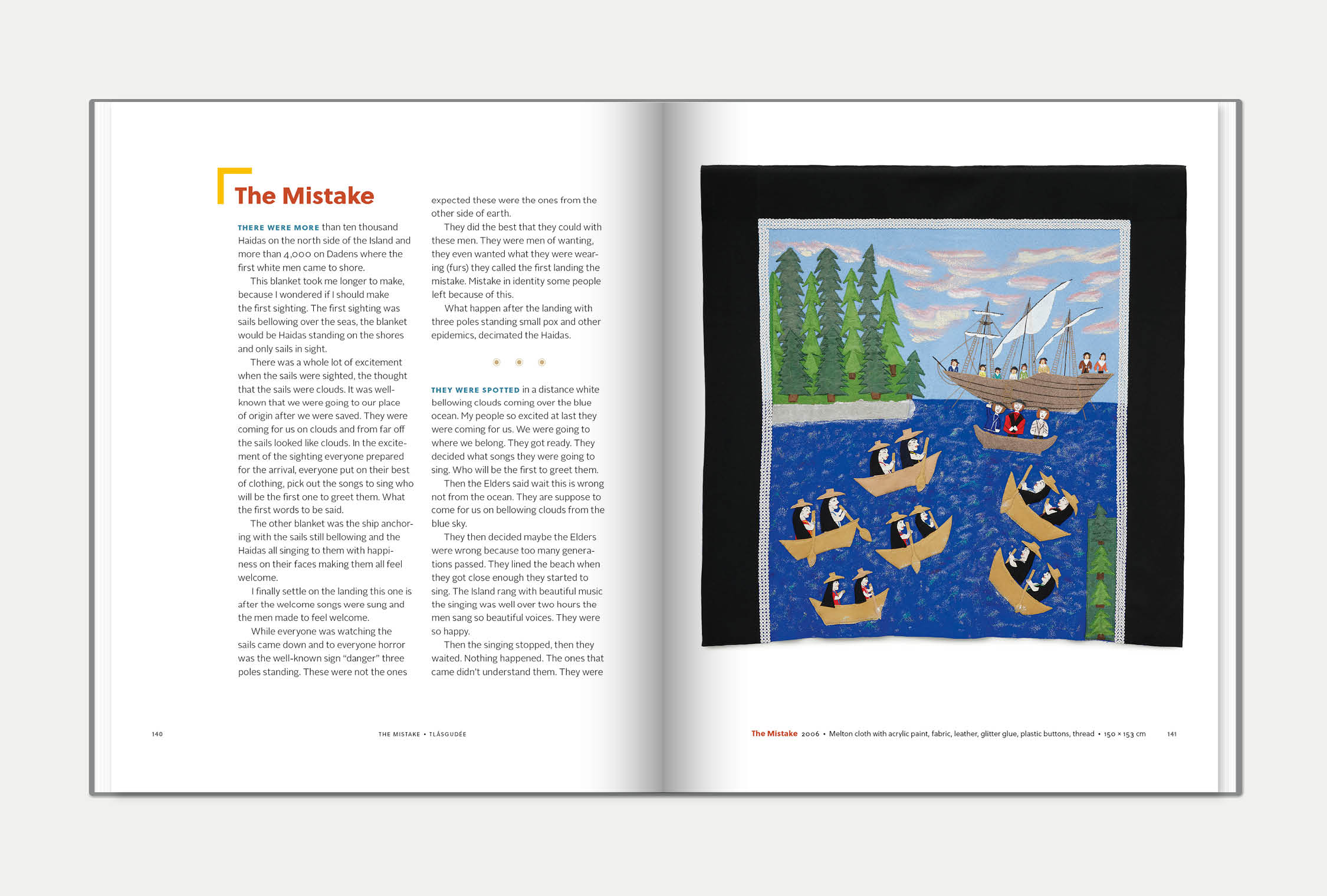 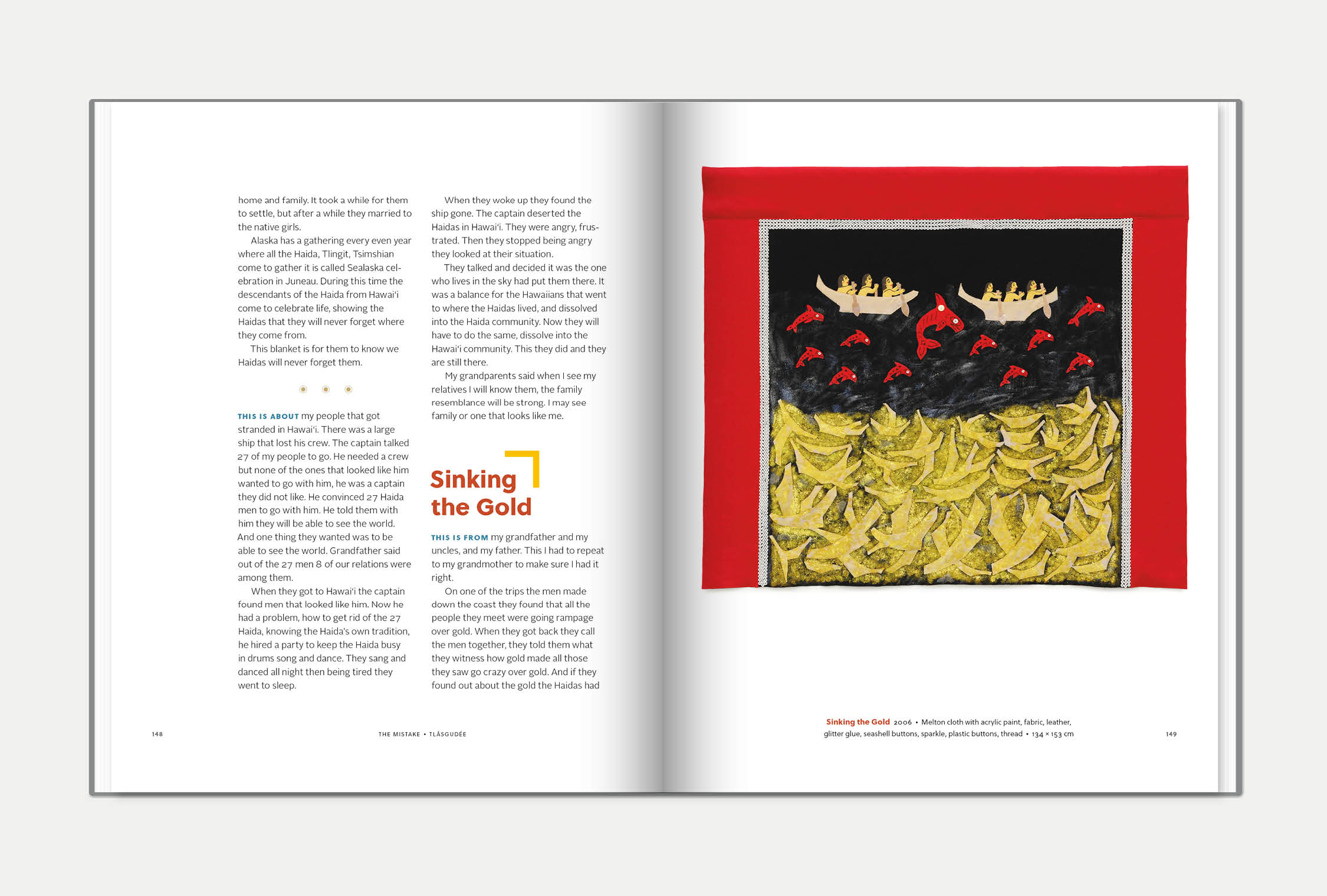 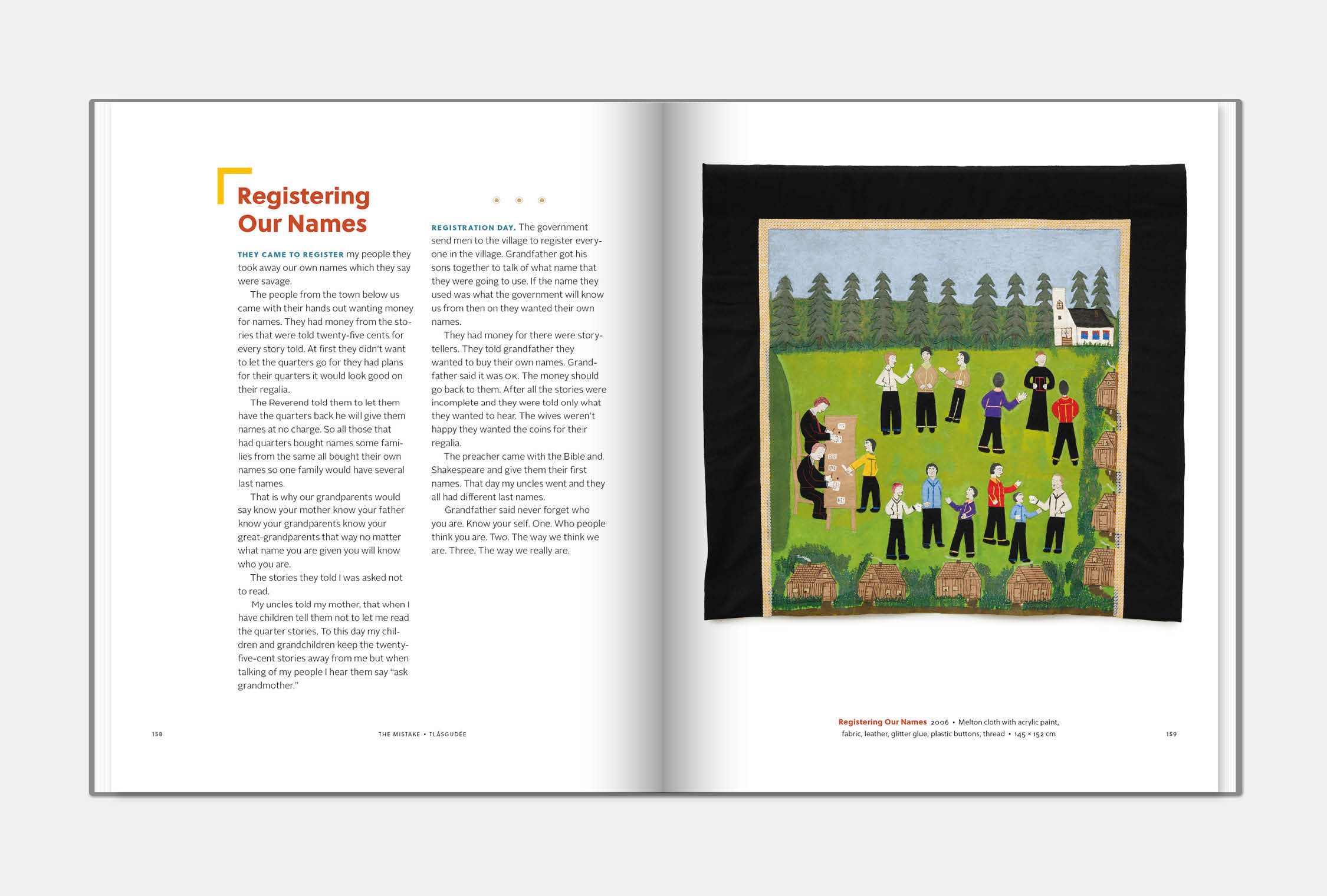 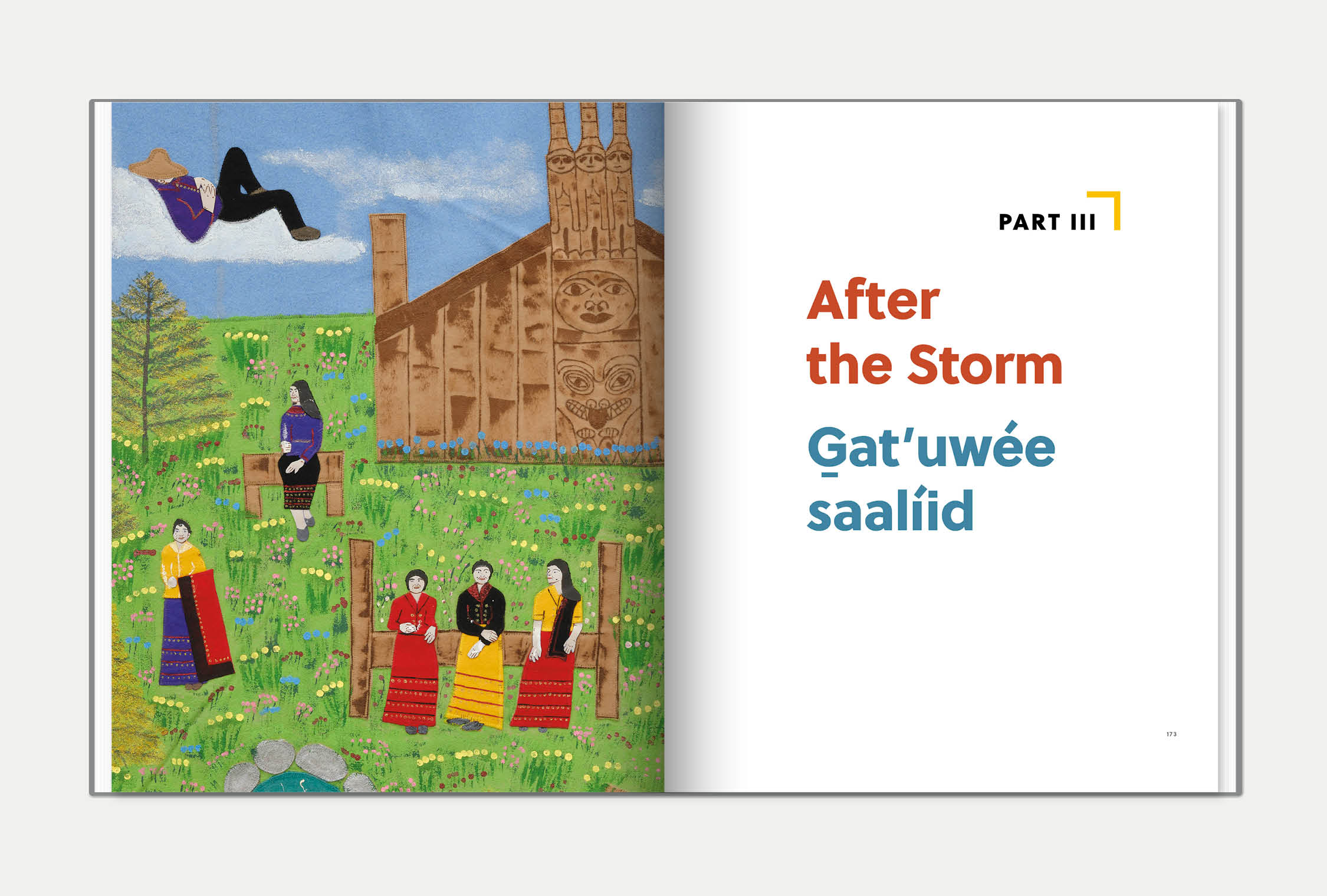 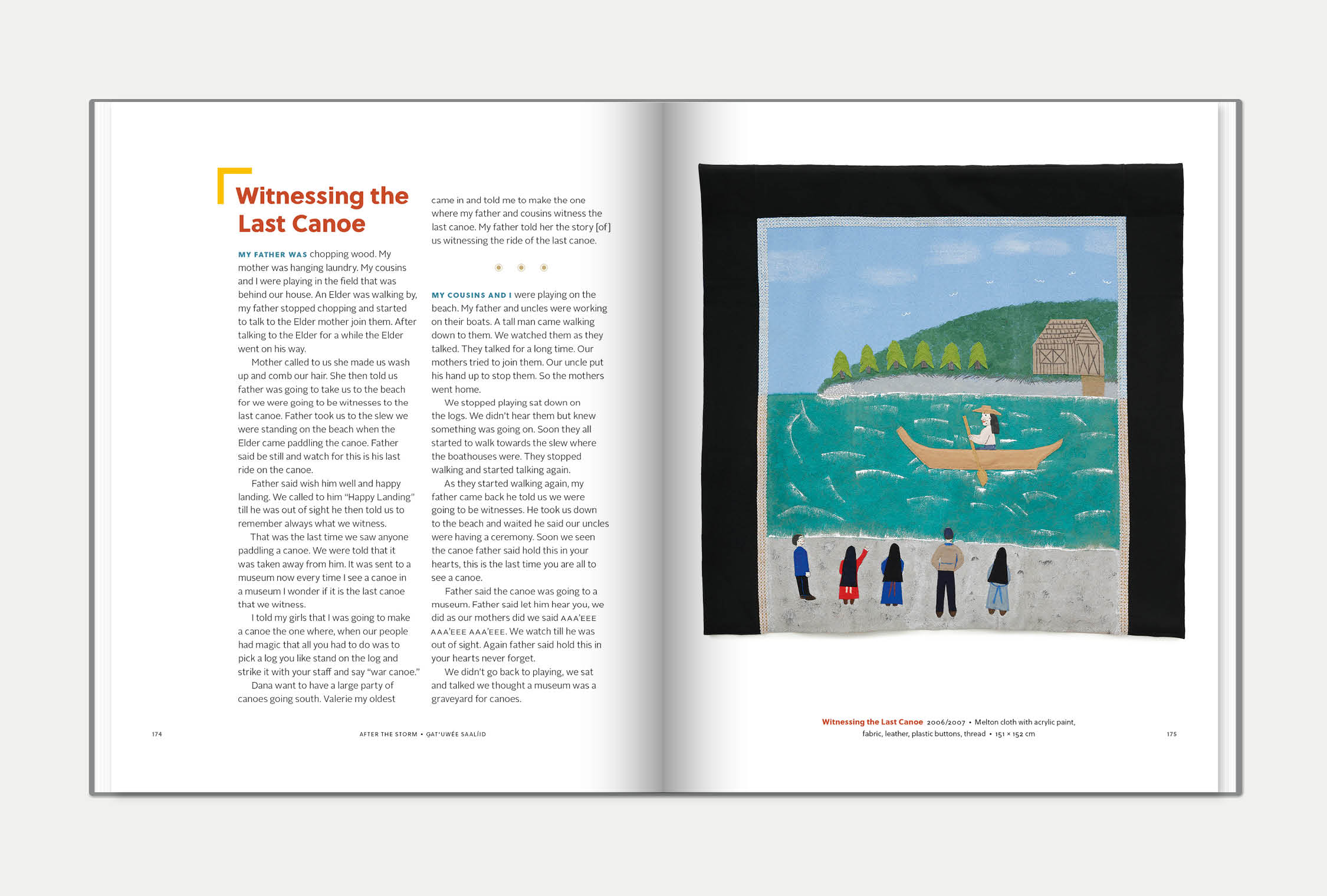 Glory and Exile: Haida History Robes of Jut-ke-Nay Hazel Wilson marks the first time this monumental cycle of ceremonial robes by the Haida artist Jut-Ke-Nay (The One People Speak Of)—also known as Hazel Anna Wilson—is viewable in its entirety. On 51 large blankets, Wilson uses painted and appliquéd imagery to combine traditional stories, autobiography, and commentary on events such as smallpox epidemics and environmental destruction into a grand narrative that celebrates the resistance and survival of the Haida people, while challenging the colonial histories of the Northwest Coast.

Of the countless robes Wilson created over fifty-plus years, she is perhaps best known for The Story of K’iid K’iyaas, a series about the revered tree made famous by John Vaillant’s 2005 book The Golden Spruce. But her largest and most important work is the untitled series of blankets featured here. Wilson always saw these works as public art, to be widely seen and, importantly, understood. In addition to essays by Robert Kardosh and Robin Laurence, the volume features texts about each robe by Wilson herself; her words amplify the power of her striking imagery by offering historical and personal context for the people, characters, and places that live within her colossal work. Glory and Exile, which also features personal recollections by Wilson’s daughter Kūn Jaad Dana Simeon, her brother Allan Wilson, and Haida curator and artist Nika Collison, is a fitting tribute to the breathtaking achievements of an artist whose vision will help Haida knowledge persist for many generations to come.

Robert Kardosh is the owner and director of Vancouver’s Marion Scott Gallery. A specialist in the field of Inuit art, he has written numerous catalogues and articles on some of the most important Inuit artists of our time. Along with his mother, the late Judy Kardosh, he worked closely with Hazel Wilson and her family as the artist’s dealer and representative for more than thirty years. He is a lifelong student of Haida culture.

Kūn Jaad Dana Simeon: My name is Kūn Jaad. My mother is Jut-ke-Nay Hazel Wilson. My grandmother is Grace Bell Wilson DeWitt. I am full-blooded Háada Láas of Haida Gwaii. I am a descendant of St’langng Laanaas, from the house of Sgaann 7iw7waans. My mother, Jut-ke-nay, was my teacher to make Haida robes. Every robe I created, I asked her to review. She was critical. Honest. The day she went home she gave me her final blessing, told me that she taught me everything she knew.

“To date the History Robes have not been shown to the public [. . .] But for now, the book is a great way to see and appreciate the scope of Wilson’s work.”