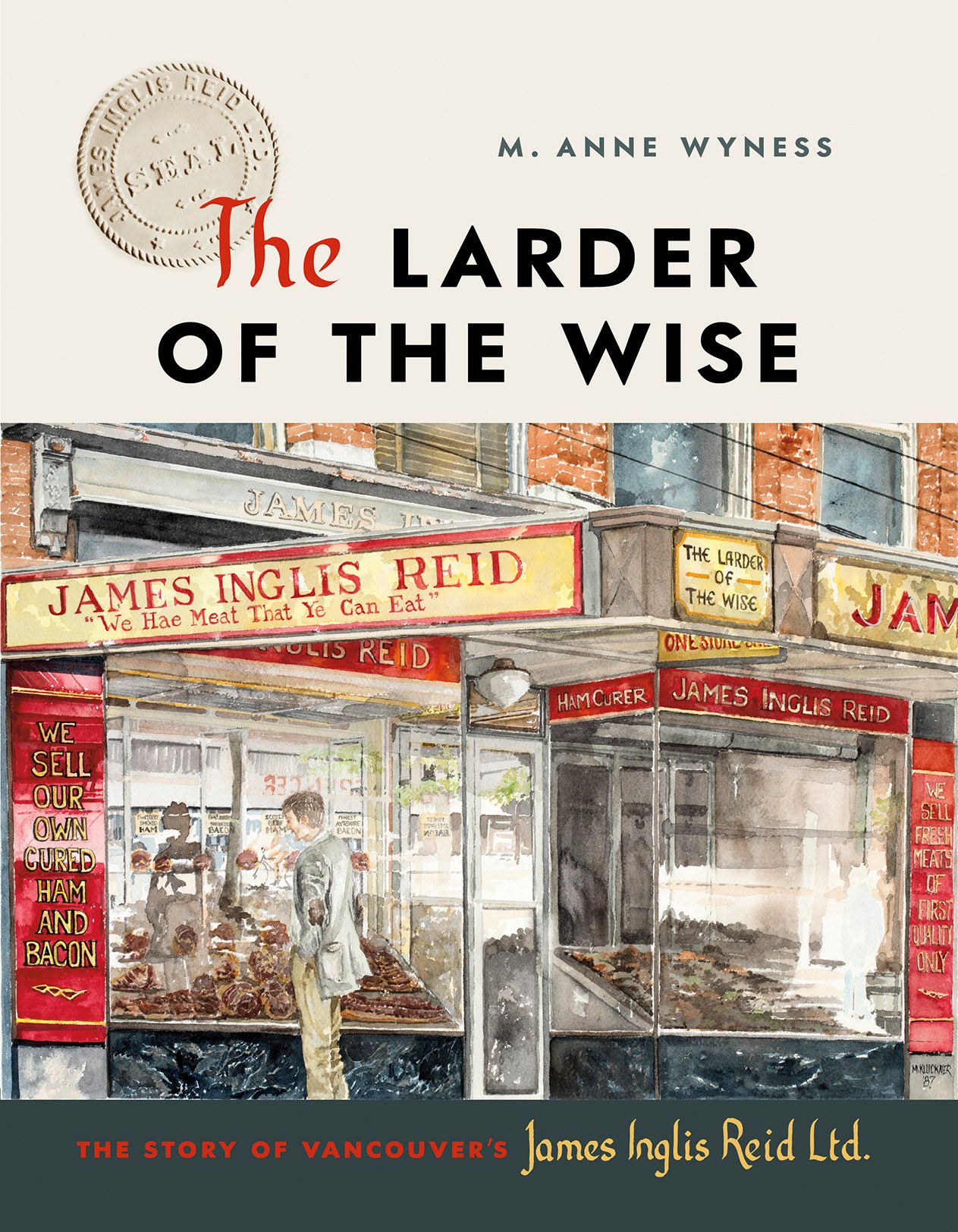 The Larder of the Wise

“So often we forget what small pleasures can be derived from visiting a local butchery. Larder of the Wise is a nostalgic trip down memory lane for Vancouverites – carnivores and all!” —David Robertson, chef and author of Gather and The Dirty Apron Cookbook

“The story of a unique Vancouver shop that, for many an immigrant Scot, evoked the smell and taste of home.”

—Kate Bird, author of Vancouver in the Seventies 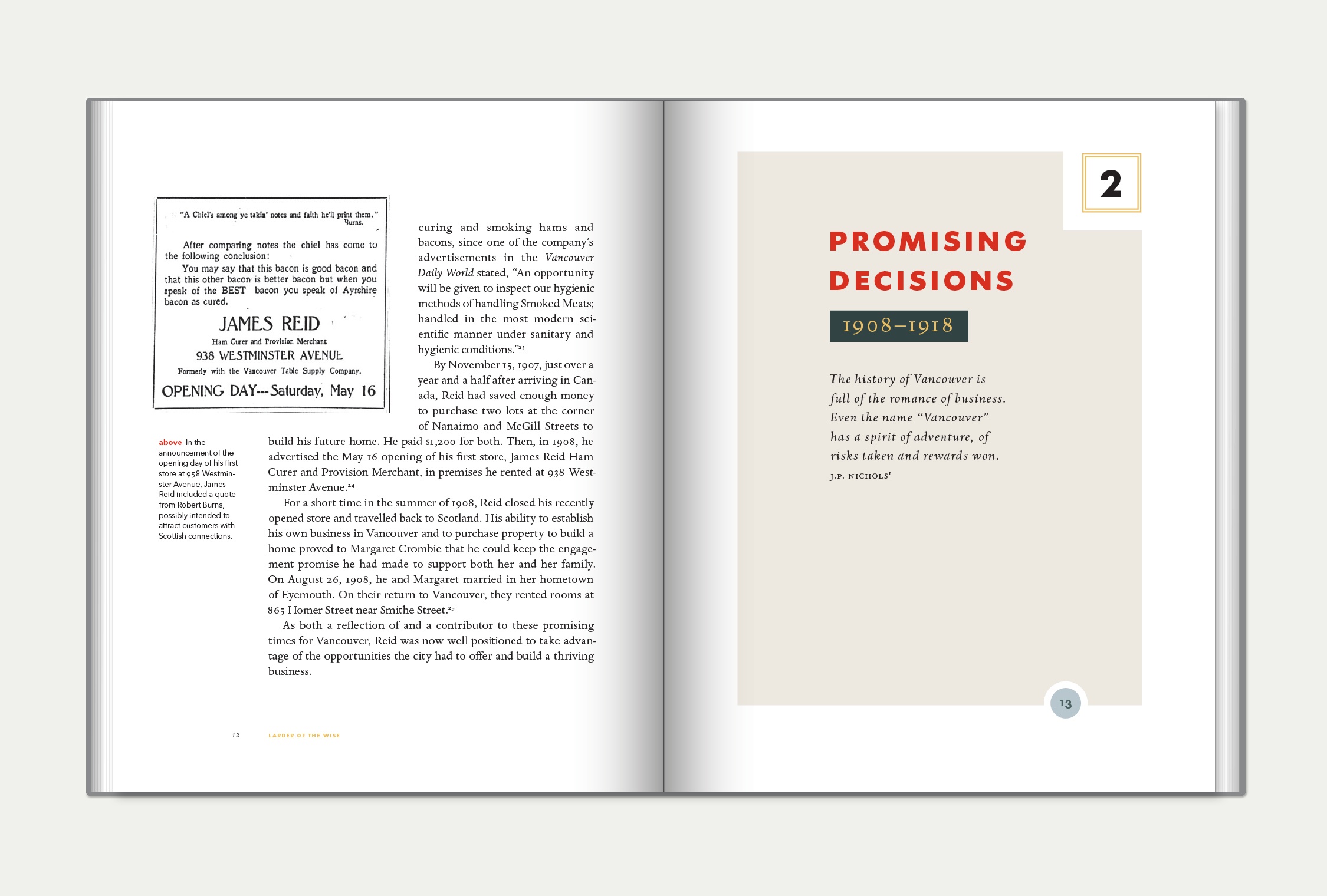 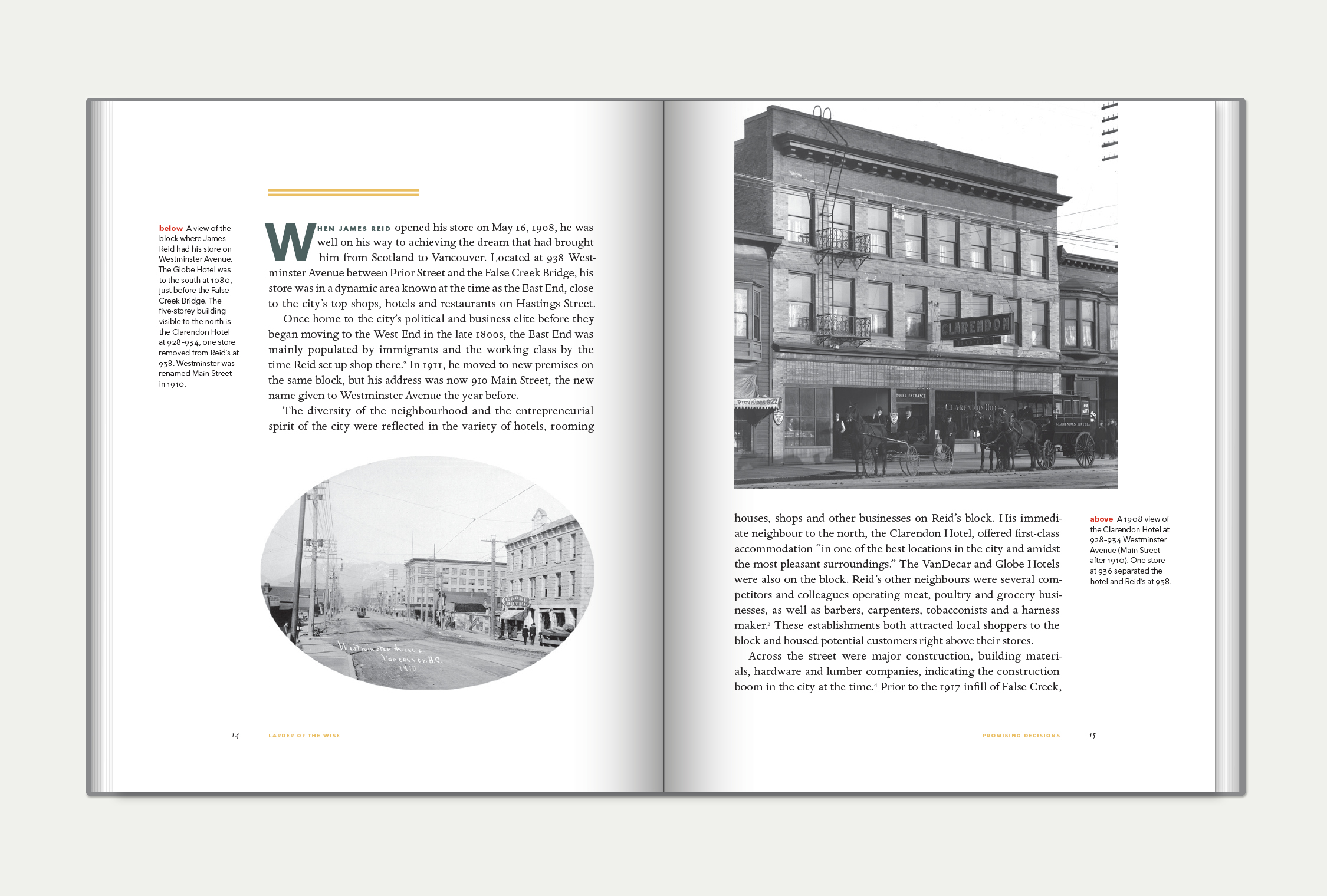 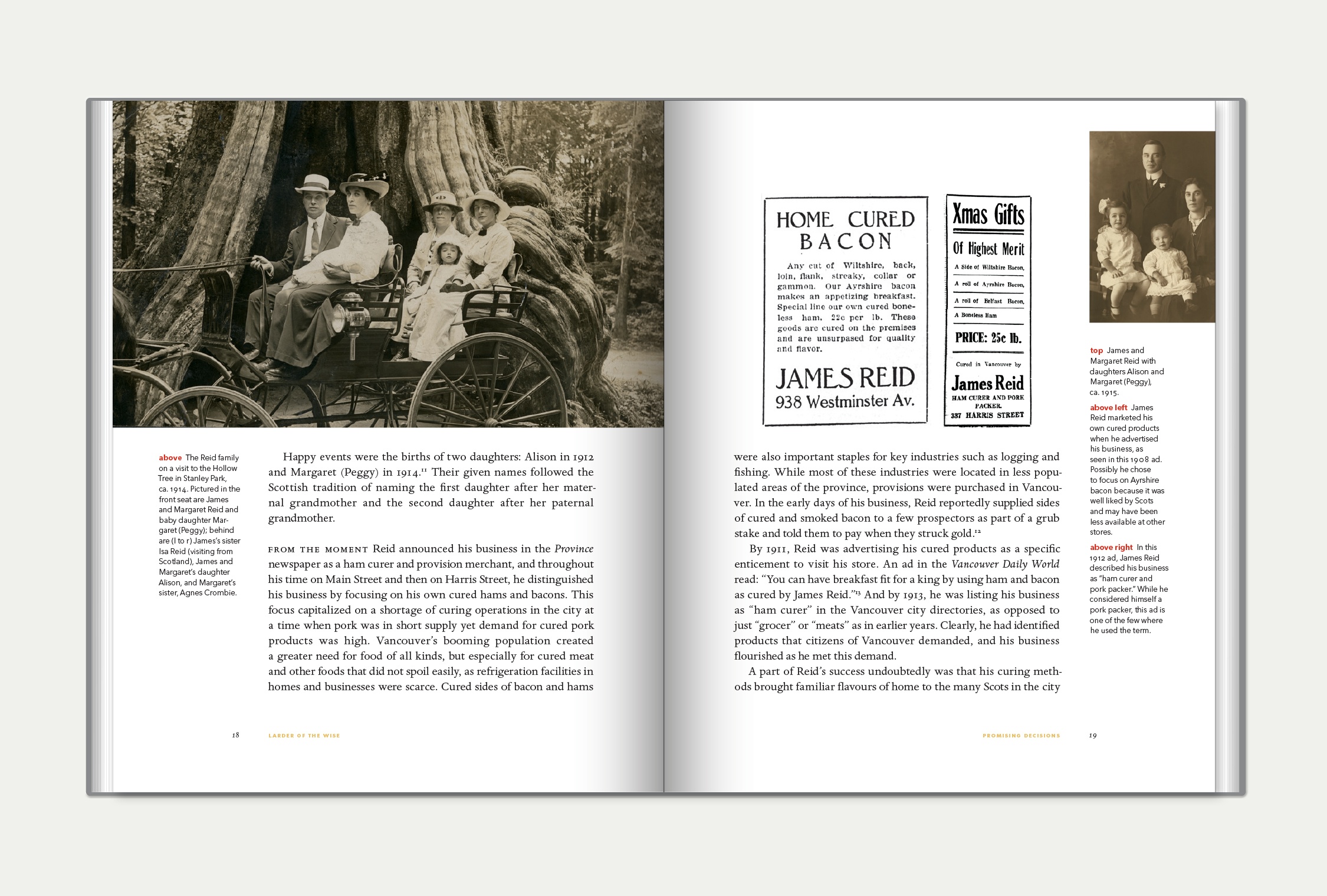 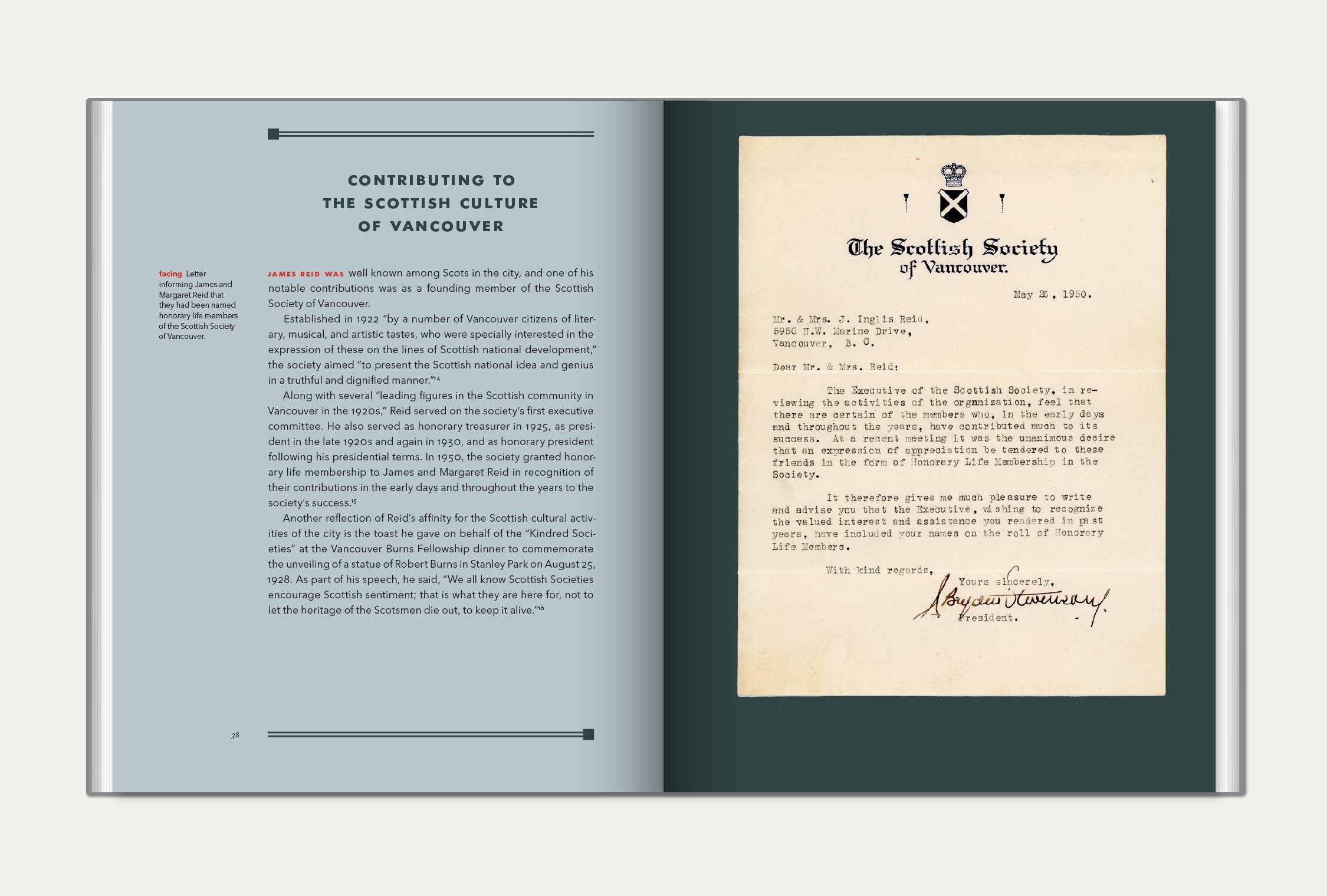 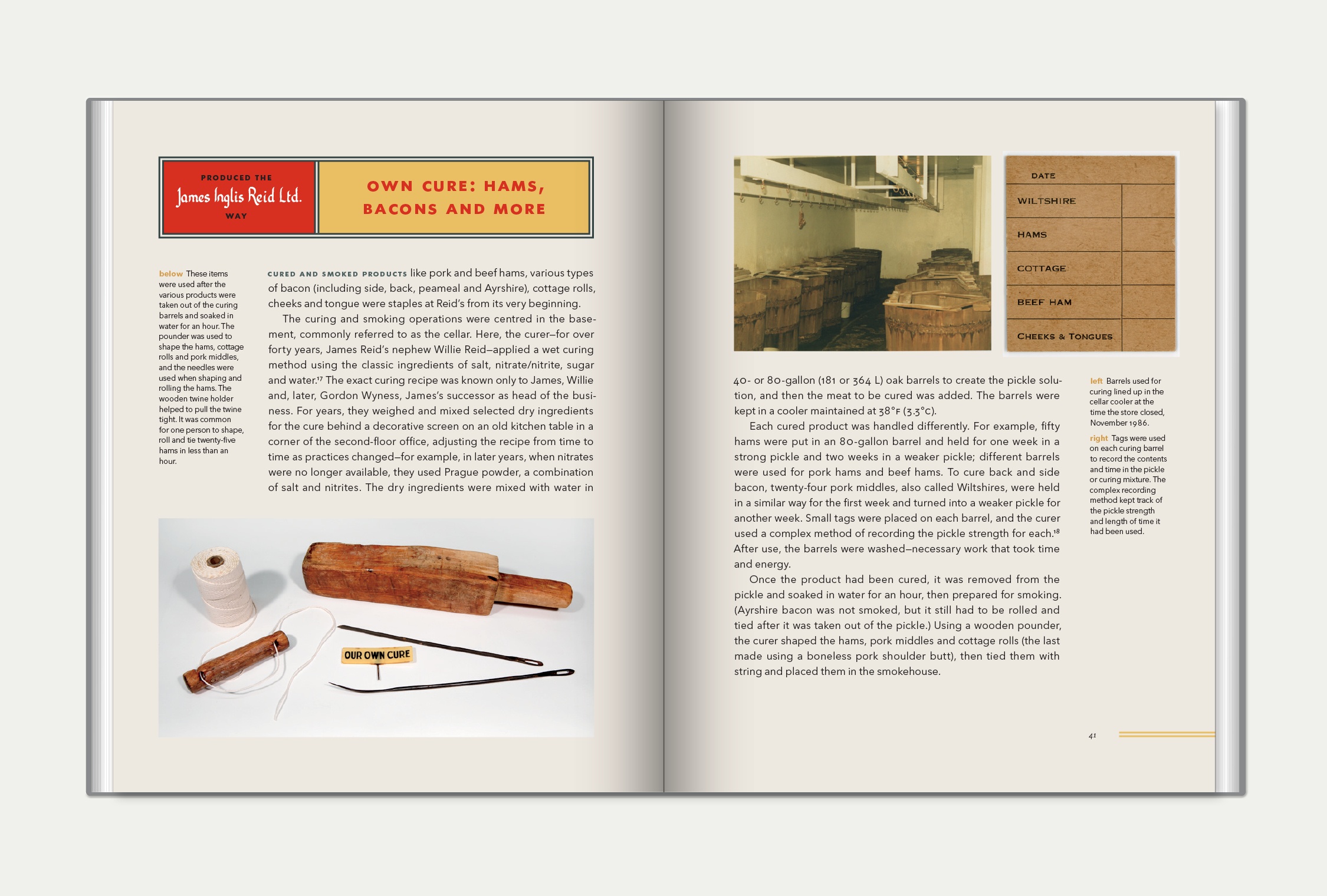 The Larder of the Wise: The Story of Vancouver’s James Inglis Reid Ltd. traces the history of the iconic store whose traditional Scottish fare and well-remembered hallmarks of “We hae meat that ye can eat” and “Value always” earned the following of devoted customers from inside and outside of the city for almost eighty years.

Founded in 1908 and situated for most of its history at 559 Granville Street, Reid’s was a fixture in Vancouver’s downtown shopping district. Customers were drawn by the store’s cured and smoked hams and bacons, expertly prepared sausages and haggis, freshly baked meat pies and scones, and many other favourite items—almost all made on premises using recipes and artisanal techniques passed down for decades.

When it closed in 1986 to make way for the Pacific Centre development, many thought an important part of Vancouver heritage was forever lost. But thanks to a treasure-trove of business records, letters, photos and objects preserved from the store, and drawing on her own personal memories and knowledge of the business as the granddaughter of company founder James Reid and the daughter of Gordon Wyness, who succeeded Reid as manager, author M. Anne Wyness brings this special store alive once again.

Richly illustrated and engagingly told, this story of a unique family business is also a story of Vancouver itself. Through economic booms and declines, two world wars, shifts in consumer habits, the rise of the suburbs and the changing fortunes of the downtown Granville Street area, Reid’s enjoyed prosperity and endured challenges in step with a changing city.

Born in Montreal, M. Anne Wyness grew up in Vancouver. Throughout her professional nursing career, she focused on the care of adults in high-acuity settings, particularly the neurosciences, clinical teaching and interprofessional education. She is an Associate Professor Emeritus at the University of British Columbia. In retirement, Anne continues to learn about Vancouver’s history as a member of the Vancouver Historical Society and of the Readers Panel of British Columbia History magazine. She served on the Board of the Friends of the Vancouver City Archives and continues to be a member of the Society.

“The Larder of The Wise shows how the loss of a small historic business does not just mean losing a place to shop; it means losing all the connections the business built, the legacy it established, and the memories contained within it.”

“We no hae meat anymore, at least not like Reid’s. But now we hae this wonderful book that ye can read.”

“Reid’s granddaughter, M. Anne Wyness, brought the legacy of her family’s business back into the spotlight through this beautiful and photo-rich book, perfect for local history buffs and food lovers alike.”

“Every so often, a project arrives that hits an editor’s sweet spot, the topic a perfect fit with the editor’s own interests. Such was the case with me and The Larder of the Wise: The Story of Vancouver’s James Inglis Reid Ltd.”

“Wyness has provided us with several gems to remember about a top-quality Vancouver family-owned business with a few mysteries to explore further.”

“The story of a unique Vancouver shop that, for many an immigrant Scot, evoked the smell and taste of home.”

—Kate Bird, author of Vancouver in the Seventies

“So often we forget what small pleasures are derived from visiting a local butchery. Larder of the Wise is a nostalgic trip down memory lane for Vancouverites—carnivores and all!”

—David Robertson, chef and author of Gather and The Dirty Apron Cookbook

“This engrossing and intimate portrait of a beloved family business hums with the life of a changing city.”