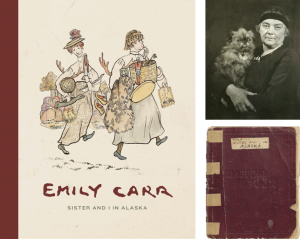 by David. P Silcox, author of Sister & In Alaska

People want to know where and how I discovered Emily Carr’s long-lost diary of the trip she and her sister took to Alaska in 1907. I’m always happy to tell the story, but it seems especially relevant to do so now that the Art Gallery of Ontario is showing the stunning Carr exhibition (till August 9th).

In the 1970s I catalogued David Milne paintings at the home of Ruth and Tom Daly in Montreal. After becoming President of Sotheby’s Canada some years ago, I remembered their modest collection. In 2011, I called Tom Daly Jr. to invite myself to see the paintings again. Ruth, son Tom, and I had tea, a pleasant viewing, and a chat. Then Ruth said “Tom, perhaps we should show Mr. Silcox that thing in the basement.”

Tom dutifully fetched a cardboard box from which he lifted what looked like a Christmas present: a scribbler (actually a ‘Mapping Book’) with covers taped. Inside were 100 pages of fresh, lively water colours on the right-hand pages and diary entries on the left. Emily titled it Sister and I in Alaska and dedicated it to Alice. I offered to find out more about this remarkable object, made out a receipt, and put it carefully in my briefcase.

What I didn’t know then was that this diary had disappeared, as far as anyone knew, in 1947, when a few pages of it had been photographed for the Victoria Times Colonist. When I showed it to Ian Thom, curator at the Vancouver Art Gallery, his jaw dropped. When he told me that it was believed to be lost or destroyed, my jaw dropped! The long-lost diary did exist after all, and its illustrations were in mint-fresh condition, having never been exhibited.

With the Daly family’s agreement, we produced a limited facsimile edition in the fall of 2012 and then a trade edition in the spring of 2013. When the Carr exhibition opened in London last year, 100 copies sold in the first week, and kept on selling. The same thing happened at the Art Gallery of Ontario this April, where they had to reorder copies twice in the first month. The United States, where Carr is as little known as in Britain, has already absorbed over 500 copies and the presses are being readied for a third printing!

The book has been on best-seller lists and is nominated for the Melva J. Dwyer Award offered by the Art Libraries Society of North America. Emily Carr would have been astonished. Those who have bought her book have been delighted.

David P. Silcox has received the Order of Canada and a Governor General’s Award for his many contributions to all the disciplines of the arts in Canada. He has written several award-winning books: Painting Place: the Life and Work of David B. Milne; Tom Thomson: The Silence and The Storm (with Harold Town); The Group of Seven and Tom Thomson; and Christopher Pratt, as well as numerous articles, catalogues, and reviews on artists and the arts.