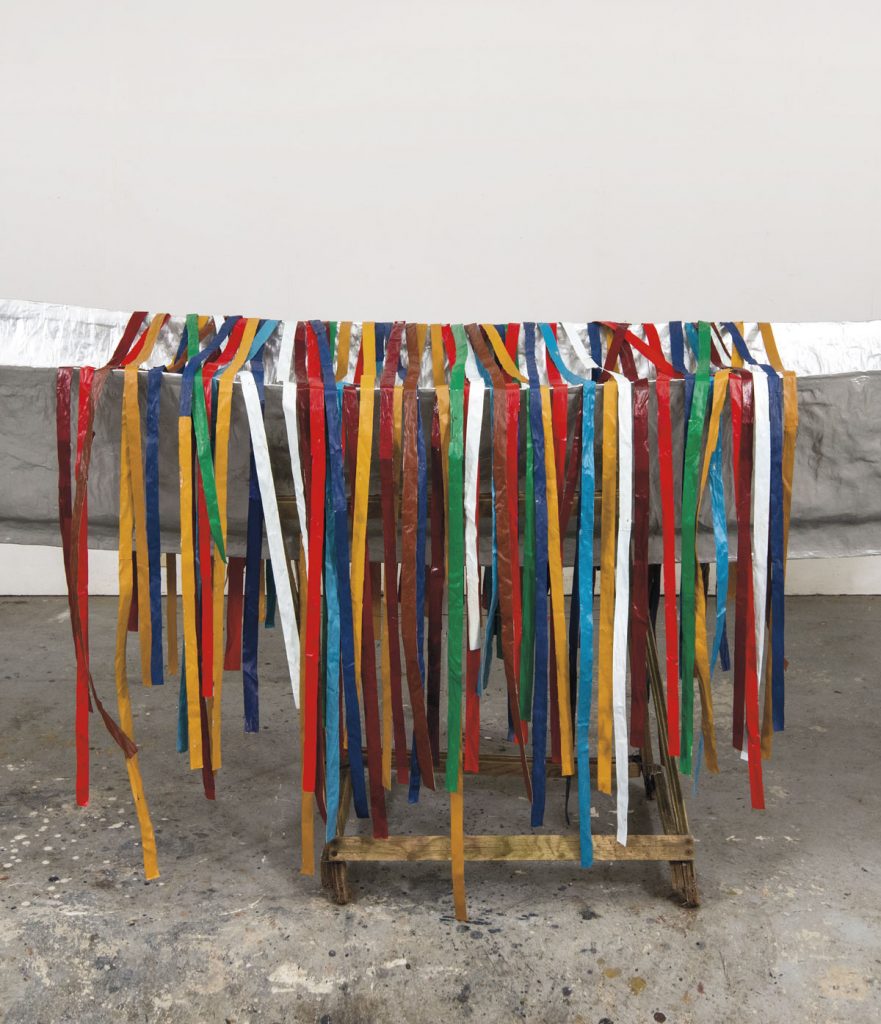 by Gathie Falk with Robin Laurence

There was a time, long ago, when I thought I would like nothing more than to be a street-corner musician. What I became, and have been for many years, is an artist. Not a singer, not a pianist, not a violinist, but a visual artist.

My apprenticeship was a long one. I was born, in the little sheep town of Alexander, Manitoba, on January 31, 1928, two years after my Mennonite parents fled to Canada from Russia. My father died when I was ten months old and my brothers were nine and three. After that, our lives were marked by poverty and frequent moves from place to place, and we often depended upon the charity of others. But I was a maker from the earliest days.

I remember sitting on a windowsill when I was about two, holding a pair of scissors, saying “scissors” out loud and triumphantly. I learned how to put them to good use. I cut a hole in a piece of cloth and tied a string around the waist to make a doll dress. Family and friends said, “Oh, she’s going to be a seamstress,” which disturbed me. That was never my ambition. Still, when I was in my teens, I designed my own dresses, which my mother sewed for me, and later, I made my dresses myself. Later still, I earned my living sewing, not dresses but pockets for suitcases.

From a very young age, I wanted to know how to draw, and I thought my elders could show me the way. When I was about three, I insisted that my mother should draw me a picture. This was during a period when I was being treated for eczema. There were no doctors in our rural Mennonite community; my mother, like others there, relied on home remedies. The one used on my eczema was a mixture of cow dung, mud, and tar, applied every evening after dinner. It stank and it burned and I’m sure I complained bitterly, but on it went. I remember that I sat on my mother’s well-protected lap during the treatment—and we were not a lap-sitting family—until it dried. After I had endured this foul mixture and been washed clean, I could sit in her lap again while she told me a story, the same story about a baby duck, lost and then found again, over and over, much to my brothers’ disgust.

One evening I asked her to draw me a picture of a woman, a mama. She said no. I kept saying, “Draw me a picture,” and she kept saying no, until she eventually relented. She somehow procured a pencil and a sheet of paper and, holding the pencil in her fist, she drew a series of strong vertical lines. I can still see those pencil marks, up and down, up and down, no bulges, no curves.

She did that and said, “There! Finished!”

I demanded arms. She drew long loose arms waving on each side of the body and again said, “Finished!”

She drew chickens, and then declared, “That’s the last drawing I will ever make for you!”

I asked why and she said, “Because I can’t draw.” And that was true.

In those early days, there were no materials for making art in our home, no crayons or coloured pencils or paint. The only paper we had was kept on a high shelf and used for letters. During the brief period of my mother’s second marriage, I was given a set of watercolours for Christmas. I didn’t know what to do with them. I wanted perfection, but I couldn’t control the sloppy wet marks I made.

I don’t remember exactly when my drawing tools and I came together in a satisfactory way. It might have been when I was at school in Winnipeg, in grade two. I was obsessed with drawing heads, but they were a source of worry to me. They didn’t look right. For a time I did as the other children in my class did, tracing a circle around the top of a paste bottle, then adding a couple of dots and a semicircle—eyes and mouth. It seemed like a simple solution to my drawing problem, but I was not really happy with those unnaturally round and simple heads either.

This is an abridged excerpt from Apples, etc. by Gathie Falk with Robin Laurence – available now.