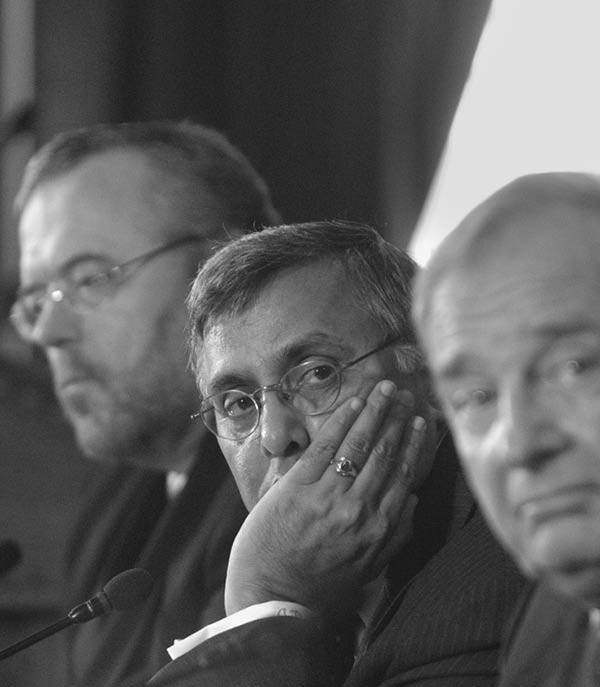 Excerpt “Journey After Midnight” – Chapter One

I was brought into a world in turmoil. The Allies had decisively defeated the Fascist/Axis armies, but the world had witnessed the first atom bombs fall on Hiroshima and Nagasaki. Several million Jews, half a million Roma and innumerable others had been killed by Hitler. The League of Nations was consigned to the history books, and the United Nations had been launched. A victorious but weakened Britain was in the midst of leaving India.

Dosanjh Kalan, the dusty village in Punjab where I was born, had been settled by my ancestors about five hundred years earlier. Dosanjhes, like most Punjabis, are believed to have travelled initially from Rajasthan. My ancestors lived a few miles away in Puadhra before moving to a new spot to create Dosanjh Kalan. From a recent study of last names published in a major Punjabi daily, I discovered that a minor princeling in Rajasthan had five sons: Dosanjh, Malhi, Dhindsa, Sangha and Dhaliwal. Since then, we Dosanjhes have grown to number several thousand in India and across the world. Of course, “Dosanjh” was a first name at a time when people in India usually had single names, so perhaps princelings were not the only fathers to name their sons Dosanjh. So though some of us lay claim to a “royal” lineage, I make no such claim. I have no doubt I come from untainted peasant stock: people of the soil who through the centuries worked their small plots of earth to eke out the most meagre of livings.

My father, Pritam Singh, along with his only surviving sibling, Joginder Singh, our Tayaji (father’s elder brother), owned a mere five-acre parcel of land. We lived together as one household; my cousins, my siblings and I were cared for by our Taeeji (father’s elder brother’s wife), Bhagwant Kaur, and our mother, Surjit Kaur, whom we called Biji (a family term for mother or grandmother). Even now, our ancestral land is owned jointly by the extended family. The bond between the Dosanjh cousins and our children and grandchildren is still strong.

My paternal great-great-grandfather, Dunna Singh, had two sons, Nand Singh and Bhola Singh. His brother had two sons as well. One was Jamait Singh; the other’s name remains unknown to me. Jamait’s brother married and had two sons. Eventually the sons married, and both of them died without issue.

One of the widows left behind by those sons was Bachint Kaur. Her husband died before muklava, the time when a new bride returns from staying with her parents for a short period following the wedding—a custom which likely arose because girls were married so young and needed to grow up a bit more before being muklavaed to their in-laws. Because Bachint’s husband died during this period, his family, the Dosanjhes, rebuffed her as a bringer of bad luck. From then on, she lived the life of a rejected widow, with no prospect of remarrying. I am unable to fathom the depths of pain and despair she must have gone through, sitting in her parents’ home. Once they too had died, she was dependent for her basic needs on her brothers and their wives. In her village, she would never have been able to escape the hungry eyes of the men, yet she was forbidden from sleeping with a man for the rest of her life.

When my brother Kamal had occasion to see Bachint late in life, she happily relinquished any right or title to the ancestral property in Dosanjh Kalan. She was a Dosanjh, and she wanted the Dosanjhes to prosper, she told my brother. She wanted to do this last “good deed” for the family that had rejected her. There was no question Dosanjhes were every bit as backward as their contemporaries.

The other widow, Basant Kaur, lived a long life and was an important part of my childhood. She was my father’s Taeeji, and we mimicked him by calling her Taeeji, too. The contours of her face were a reminder of the beauty of her youth. Her deep wrinkles were evidence of her years of struggle. She lived alone, directly across from us, in a several-hundred-year-old brick house with intricately carved wooden doors. On either side of the entrance, indented spaces had been created for divas, earthen lamps fuelled by mustard oil. I would stand in front of those doors and try to understand their place in our family’s history. Why were the doors of our household not as ancient or as expensive-looking as Taeeji’s?

My Pardada (paternal great-grandfather), Nand Singh, had two sons. The younger son died at an early age. The surviving son, Harnam, my paternal grandfather, or Dada, married Bishan Kaur, one of six children from Virkaan, a village about three miles from Dosanjh Kalan. The historic Grand Trunk Road which traverses the subcontinent from Peshawar to Delhi, built by King Sher Shah Suri in the sixteenth century, runs less than a mile away from Virkaan and connects the village with the nearby industrial and educational centre of Phagwara. Being near such a centre, and perhaps thus more aware of the rest of the world, may have inspired my Dada to go to Singapore, looking for work. Before he left, he and Bishan, my Dadi (paternal grandmother), had three sons: Pritam, my father; his elder brother Joginder, my Tayaji; and their brother, Raju, in between. My Dada stayed in Singapore for some time before falling ill and returning to India. The details are sketchy, but this much is known: he died in 1910, when my father was just four and Tayaji was twelve years old; Raju too had died by this point.

Bhola Singh, my great-grandfather’s brother, had two children: one named Budh Singh and the other a girl whose name, sadly, no one seems to remember. Budh was a handsome, lanky man with a turban and a flowing beard. Since we had no photographs of anyone in the family prior to my father’s generation, watching Budh as a boy I used to try and imagine what his first cousin, my Dada, would have looked like. From all accounts Dada had been tall, handsome and very strong. His father, Nand, had been nicknamed Ghora (horse), for being so tall, strong and handsome himself.

Tayaji, by contrast, was short, and so was my father (whom my siblings and I, following our cousins, always called Chachaji—father’s younger brother). We all blamed our Dadi Bishan for the deficit in this department, because she was a few inches shy of five feet. But what she lacked in height she more than made up for in courage and toughness. Dadi ran a tight ship. She had to, in order to raise Chachaji and Tayaji on her own. She managed it by dispatching Tayaji into her family’s care in Virkaan, and Chachaji into the care of her sister, who lived a few miles away at Badala. Chachaji finished four years of primary school there. Free of child-rearing duties, Dadi managed what little land Dada had owned. It was mere subsistence.

After some years, Chachaji and Tayaji reunited with Dadi at Dosanjh. Tayaji started working on the land, helping Dadi, and Chachaji was enrolled at J.J. Government High School in Phagwara. He would wake early in morning to feed and water the cattle, then swing his cloth book bag over his shoulder, run the few miles to school and make it to class on time. My father was a bright child, learning English, Urdu, Punjabi and math, among other subjects. He was particularly interested in history and in the ongoing political drama of India’s struggle for independence.

Mahatma Gandhi returned from South Africa in 1915. The First World War was underway, and the Komagata Maru, a Japanese steamship taking prospective Indian immigrants to Canada in defiance of the Canadian government’s exclusionary direct passage law, had been turned back in July 1914 under the menacing shadow of the Canadian warship HMS Rainbow. An Indian patriot named Baba Bir Singh, who had been living in Canada, sailed for India on August 22, 1914, at the head of a group of revolutionaries from the North American Ghadar Party, determined to overthrow British rule in India. The news of their departure for India to create “trouble” was duly cabled to the British colonial government in Lahore, which captured and hanged Bir Singh and forty-two others in March 1916, in the so-called Lahore Conspiracy Case. Bir Singh’s older brother’s son, Moola Singh Bains, in his early twenties at the time and working as a security guard in Shanghai, was my maternal grandfather, Nanaji.

To my impressionable and impoverished father, still a student, the world must have seemed full of turmoil. His own small world of Dosanjh Kalan was certainly no haven of stability or financial security. It did not help that Tayaji, though he worked hard on the land, began to squander the family’s savings on oxen, which he occasionally showed off as they outperformed and outran the oxen of the neighbours.

Dosanjh Kalan had no mechanized agriculture in the 1950s. Oxen and water buffalos were used to plough and sow our land holdings. To irrigate the soil, farmers used a Persian wheel—a chain of buckets mounted on a large wheel rotated by oxen. The buckets emptied water into a trough, from which it flowed into a network of channels.

Our lives revolved around the seasons and festivals. Some of the festivals included Persian wheel races; the largest of these was Vaisakhi, a harvest festival celebrated in northern India that has long held a special meaning for Sikhs. It was in 1699 at the Vaisakhi festival in Anandpur (now referred to as Anandpur Sahib as a sign of reverence) that the last Guru, Gobind Singh, created the Khalsa, an army of followers with strict rules for a simple life. From then on, Sikh men wore a sword, a steel bracelet, special utilitarian underwear, a comb, and turbans over unshorn hair. (The words for these five requirements all started with K; hence, they are known as “the five Ks.”) My ancestors, too, became part of the Khalsa.

When I was a child, we occasionally attended the month-end Sangrand celebrations, and we almost always attended the Vaisakhi mela, or fair, at Baba Sung Gurdwara, the temple built at the site where Baba Sung, a prominent religious figure of his time, lived and died in the service of the people of the area. The gurdwara was about six miles from our village, and we would usually walk there, pay our respects, and then eat and rejoice with the crowds before returning. At Baba Sung, the Dosanjhes were treated royally, because we were believed to be the descendants of Baba Sung’s daughter from the time of Guru Arjun Dev, fifth in a line started by the first Guru, Nanak Dev, a great poet and philosopher. The line ended with the tenth Guru, Gobind Singh, creator of the Khalsa and a great poet-warrior in his own right. Baba Sung’s importance in the annals of Sikh history is evident from the reference made to him as a contemporary and revered follower of Guru Arjun in the works of Bhai Gurdas, perhaps the greatest chronicler of the Sikh Gurus.

Journey After Midnight: India, Canada and the Road Beyond by Ujjal Dosanjh is available now!