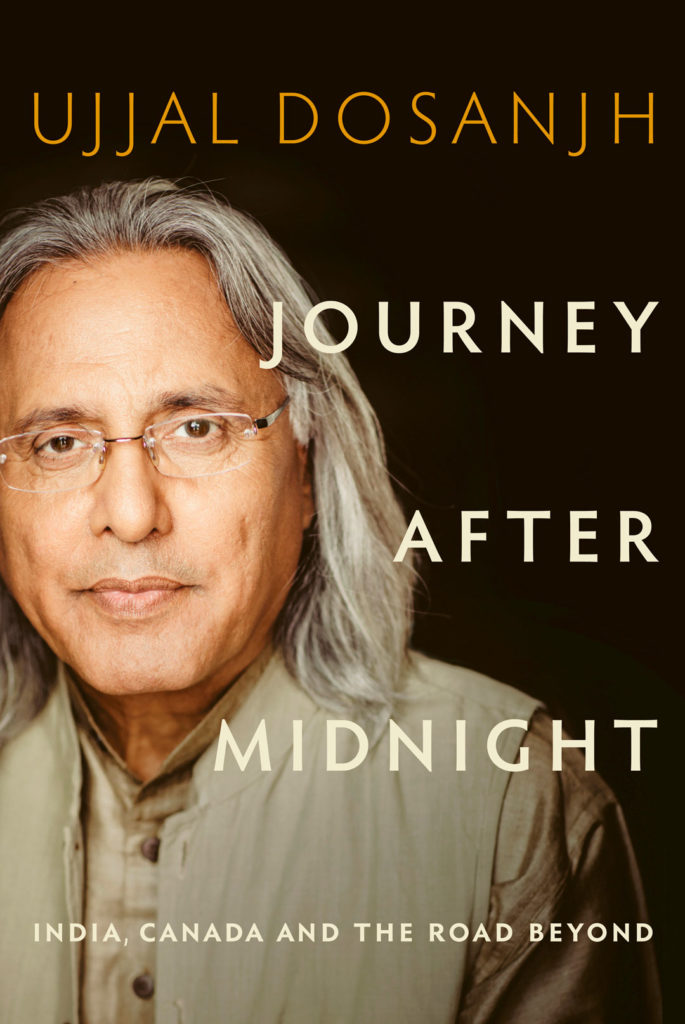 Ujjal Dosanjh was born at a pivotal moment in history, and it was perhaps inevitable that politics would define his life. In rural Punjab, he grew up listening to debates between his father, a follower of Jawaharlal Nehru and the populist Indian National Congress, and his grandfather, a former Indian freedom fighter and socialist. As he recounts in this entertaining and deeply personal memoir, his own passion for social justice would eventually propel him from his home village to the upper echelons of the Canadian political scene. Journey after Midnight is a fascinating portrait of a global citizen and a very colourful life.

Introduction from Journey After Midnight by Ujjal Dosanjh

I was born in Dosanjh Kalan, a dusty village in rural Punjab. I exited my first home, the womb, on October 14, 1946—exactly ten months before Pakistan was tragically partitioned from India, its mother, on August 15, 1947—making me a child of midnight.

I spent the first eighteen years of my life in India, fled briefly to Britain and then came to Canada, where I have remained for close to five decades. I am indebted to India for giving me its ancient civilization as a birth gift and for nurturing me before I fled as a fugitive from its battles. I am grateful to England—which I despised as a former colonial power, until I landed in London—for what it taught me during my short sojourn in its embrace, though I felt like an interloper there. Afraid to go back to India as a failure, I embarked for Canada, where I was able to drop anchor. Together, these three countries have given me a life filled with more victories than defeats, more joys than sorrows. The world has done much to help make me a better man, and some may say I haven’t done too badly.

Why should my story matter? It does not seem important in the larger scheme of things. But our own stories always matter to us, and to the generations that follow. Merging with the stories of so many others, they give meaning to our lives and to the lives of nations.

Everything may not have happened exactly as I recall it in these pages. Memory is a magician that plays tricks on us. We remember the mundane but often forget the profound. Memory saves pleasures past but deletes many episodes of pain. Nonetheless, I have remained faithful to the truth as I see it and have done my best to make this a fair accounting.

As I approach my final years, I am impatient with life, but also at peace. I am content, but still in search of the next challenge. I come by my activism honestly. My inner determination is fuelled by what I learned from my heroes, the fighters for freedom I most admired: my father, Master Pritam Singh Dosanjh; my maternal grandfather, Jathedar/Jarnail Moola Singh Bains; and Mahatma Gandhi, the father of the nation I deserted to make Canada my home.

My father used to say, “One may walk fewer steps in life, but one must always walk with dignity.” His personal credo has sustained me on this journey after midnight, from the dusty roads of rural India I so vividly remember to the full life I continue to enjoy. The inspiration I draw from my heroes is responsible for any good I may have done. For the mistakes in my life, more than a few, I alone am responsible.

Journey After Midnight is available in stores now.