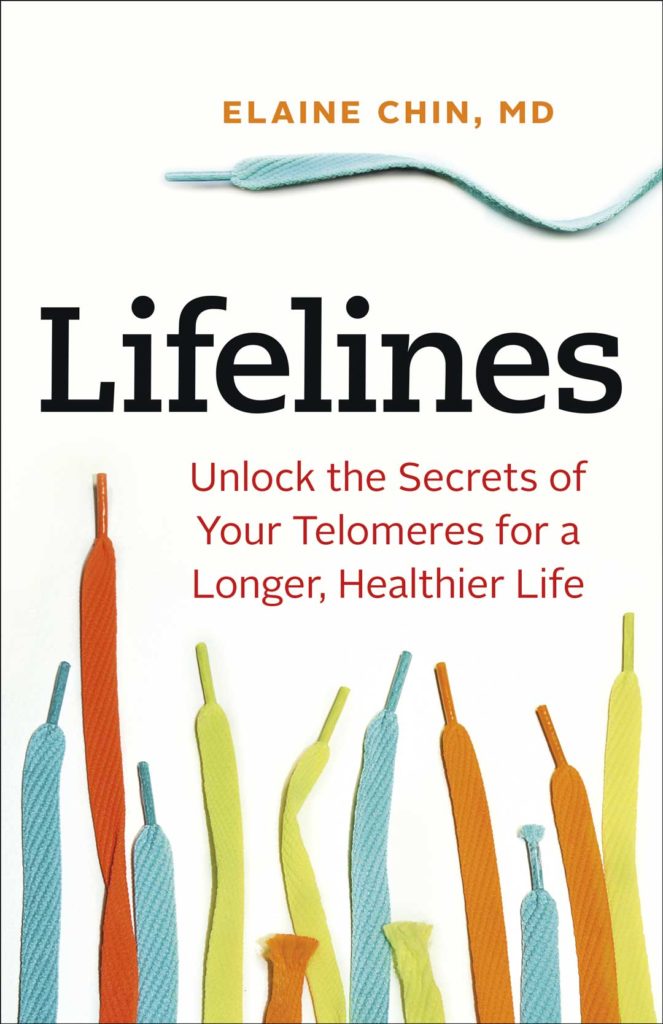 Excerpt: “Lifelines” – What Are Telomeres?

In The Globe and Mail national bestseller Lifelines: Unlock the Secrets of Your Telomeres for a Longer, Healthier Life Dr. Elaine Chin offers a ground breaking guide to living a longer, healthier life through the cutting-edge science of telomeres. But what exactly are telomeres?

Apart from death and taxes, there’s not a lot that’s certain in life.

What else can we count on? The moon will rise, the sun will set, and each person on earth is a unique being. Even if you’ve never taken a biology course, you know that every one of us is different because of DNA. Countless forensic cop shows have made DNA a common theme, even though the term deoxyribonucleic acid itself doesn’t roll off the tongue as easily as DNA.

What’s not as well-known—and I’m aiming to help change that—is that the very ends of our DNA strands, like the aglets at the ends of shoelaces, determine how long we’ll live. Aglets, made of plastic or metal, stop your shoelaces from unraveling. The tail ends of DNA strands are called telomeres, and we want to shout that word from the rooftops and make it just as well-known as DNA.

There’s an important difference to understand in this simple comparison. When a shoelace does break down, we just buy another. But when a telomere can no longer do its job, the chromosomal material it’s protecting degenerates—and so does a part of you, aging your body and bringing you closer to chronic disease and possibly death. Telomeres are essentially your true biological clock, a major determinant of how long you will live and be healthy. People have often asked me: “So that’s it? If I have too many short telomeres, I’m doomed?”

The answer is no.

Let’s use a different analogy to help explain the real risk of telomere shortening. How quickly we wear away the treads on our car tires depends on a number of factors: how far we drive, the pressure in the tires, and how often and hard we slam on our brakes. (In the coming chapters, I’ll describe what wears and tears your telomeres.) Once our tires become bald, we can still drive on them, but they are less stable and less reliable in wet weather. They can increase our risk of getting in an accident if they have a poor grip on the road. Ditto with short telomeres: they make our chromosomes less stable and put us at higher risk for developing abnormal cells and disease.

In theory, it may be possible to induce the human telomerase gene to produce telomerase (recall this enzyme can repair telomeres). Imagine the possibilities of that. Having the ability to prevent cells from aging would forever change the landscape of medicine—and, really, life as we know it. This sounds dramatic, and it is.

As it stands now, each human cell divides a certain number of times before entering a nondividing state called replicative senescence. The number of times a cell can divide is called a cell’s Hayflick limit. Different kinds of cells have different Hayflick limits (skin cells in a petri dish, for example, can divide approximately 50 times before they stop dividing). When enough of an organ’s cells have died, the organ begins to function inefficiently. This leads to organ failure, which eventually can lead to the organism dying. The discovery of telomeres supports the Hayflick limit theory. We now know that this mechanism of telomere shortening causes cellular senescence, or cell death. However, cancer cells divide indefinitely, defying the Hayflick limit. Today we know this is caused by the continuous activation of telomerase within unhealthy cells.

So it seems if we could kick-start our body’s production of telomerase, we could extend the Hayflick limits of all our healthy cells and reap the benefits of robust telomeres indefinitely. That would change the nature of medicine completely—but it’s a very big “if.”

Read more by picking up a copy of Lifelines – available in bookstores now!