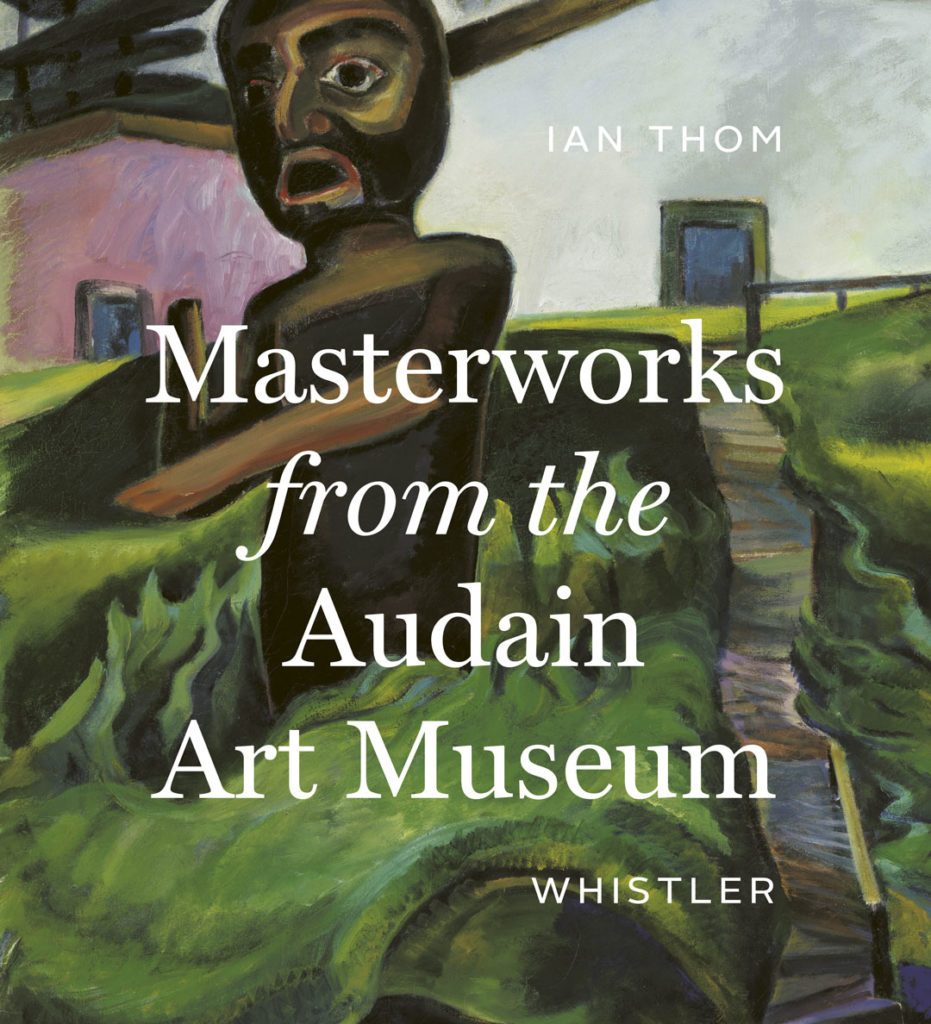 The Audain Art Museum in Whistler opens its doors to the public on March 12th 2016. Set against the spectacular mountains and forests, the museum showcases the astonishing breadth of British Columbia’s art from the late eighteenth century to the present. Masterworks from the Audain Art Museum is a sumptuous celebration of the remarkable permanent collection which includes historic Northwest Coast masks, career-defining paintings by Emily Carr and E.J. Hughes, and groundbreaking sculpture, photography and painting by contemporary artists.

When Michael Audain and Yoshiko Karasawa began to acquire works of art produced in British Columbia, it was never with the intention of tracing the history of art in this province. However, the sheer number of works they’ve collected now makes this possible, albeit in a less than completely comprehensive way. It is worth examining this collection in some depth because it contains an astonishing breadth of art from the eighteenth century to the present, including exquisite First Nations masks; a wide selection of works by Emily Carr and Edward John (E.J.) Hughes, spanning their entire careers; and stunning examples of modernism, from Lawren Harris and B.C. Binning through Jack Shadbolt, Gordon Smith and Bill Reid to contemporary artists such as Rodney Graham, Jeff Wall, James Hart and Marianne Nicolson.

The first important flowering of artistic activity occurred in British Columbia long before white settlement and contact. In the coastal regions, the First Nations benefited from abundant supplies of food, water and materials to build their homes and carve their poles and masks. This production of artwork accelerated with the arrival of white traders, who introduced metal tools that made carving cedar and native hardwoods substantially easier. The nineteenth century saw a remarkable abundance of First Nations art all along the coast and among the Nisga’a, Gitxsan and others who lived by great northern rivers. It is with works of art from this period that the Audain Art Museum Collection begins.

Collected in the nineteenth century as curios and ethnographic examples rather than as works of art, many First Nations masks travelled far beyond our borders. One of the most remarkable aspects of the Audain Art Museum project has been the repatriation of these exceptional masks to this province. The collection includes superb examples of work by Gitxsan, Haida, Haisla, Heiltsuk, Kwakwaka’wakw, Nisga’a, Nuxalk, Salish, Tlingit and Tsimshian artists. Some of these masks are of great rarity (among the few surviving examples), and all are of high quality, great artistry and exceptional beauty, though it has taken the larger Euro-Canadian community a long time to recognize this. Although none of the First Nations had words for “art” per se, there was, as these objects vividly reveal, no shortage of creativity, imagination and skill among the carvers and painters of the coast.

It is significant that one of the first British Columbians to recognize the art of the First Nations peoples of this province was herself an artist. Emily Carr, born in Victoria in 1871, has become the best-known British Columbian painter. The Audain Art Museum includes a remarkable representation of her work from most periods of her career. The earliest canvases and watercolours show her adoption of post-Impressionist colour and brushwork in France in 1911 and her initial work in First Nations villages in 1912. Later works showcase her experiments with landscape in the third and fourth decades of the twentieth century, including her return to painting in the late 1920s and her magnificent later totemic works from the early ’30s. Finally, the collection contains several examples of her ecstatic explorations of the coastal forests of Vancouver Island.

Carr was not, of course, the only person to be struck by the visual splendour of the province. Artists such as William Weston and, most importantly, Frederick Varley, redefined our understanding of the landscape beginning in the late 1920s. Varley and his students explored the mountainous expanses of the region and produced vivid depictions that remain unmatched in their power and beauty.

Modernism arrived in the province through the curriculum at the Vancouver School of Decorative and Applied Arts (now Emily Carr University of Art + Design) but also through the example of individual artists. Lawren Harris settled in Vancouver in 1940, and his abstract paintings provided direction for many younger painters. The modernism of Bertram Charles (B.C.) Binning was of a different tenor but also provided a new direction for British Columbia painting. As well, Harris, though he was an abstract painter for most of his life in Vancouver, was deeply interested in good painting of all kinds. A keen supporter of Emily Carr in her lifetime and of her legacy after her death, he was also an early champion of the work of E.J. Hughes. Hughes’s painstaking depictions of the coastal landscape, usually inhabited by humanity, provide a look at the landscape of the region very different from Carr’s. Ironically enough, although Hughes’s work is now very popular, there was little support for it for much of his painting life. The Audain Art Museum, drawing on its own collection and on a generous long-term loan from the Barbeau Owen Foundation, is able to present, as with Emily Carr, a selection of works that provide a complete view of Hughes’s long career.

Painting in Vancouver was extremely active during the 1960s, and one of the most brilliant practitioners of the time was Claude Breeze. His visceral, deeply felt imagery is still remarkably powerful decades after he first made his work. Toni Onley had a more formal, cerebral approach to painting, and his collages from the early 1960s are among his strongest works. (Although the art scene in the 1970s was an active one, the Audain Art Museum does not have any works from the period.)

By the 1980s and ’9os, British Columbia art making saw the remarkable rise of the so-called Vancouver School of photo-based artists. Individuals such as Jeff Wall, Ian Wallace, Christos Dikeakos and Rodney Grahambegan to produce work that rethought the photographic approach and that was soon noticed both here and around the world. Slightly younger artists such as Ken Lum, Roy Arden and Stan Douglas followed their own paths while building on the examples of the first group. These decades also brought a remarkable resurgence of art making by First Nations people, which resulted from both the increasing market for their work and the slow rebuilding of cultural traditions within communities. Robert Davidson, Reg Davidson, James Hart, Beau Dick and Henry Speck, to name only a few, joined early pioneers such as Bill Reid in producing carvings and bronzes, and their work too was noticed and collected around the world. Major works by all of these artists can be found in the Audain Art Museum. Especially noteworthy is James Hart’s monumental The Dance Screen (The Scream Too).

In the 1990s there was also a return to painting among a group of younger artists. The most successful of these were Attila Richard Lukacs and Graham Gillmore.

Our understanding of what is possible in First Nations art is constantly evolving, as seen in the work of Sonny Assu, Marianne Nicolson, Lawrence Paul Yuxweluptun, Brian Jungen, and Shawn and Dean Hunt. These artists, while respecting traditional culture, are very much aware of currents in contemporary art and society. Similarly, the use of photography has shifted and developed in the work of artists such as Rodney Graham, Jeff Wall and Ian Wallace and younger artists such as Stephen Waddell and Tim Lee . Their sense of place and narrative and their relationship to the history of photography is in continual flux.

The Audain Art Museum provides a unique opportunity to consider some of the major artists of the region in a permanent installation that reflects the enormous richness and variety of artistic expression in the province over the last two hundred years. I invite you to learn more about some of the treasures of the collection as you peruse these pages. Enjoy!

Masterworks from the Audain Art Museum, Whistler is available now.