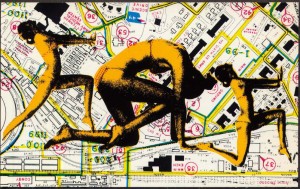 This gallery works with a group of contemporary artists from Cape Dorset, Baker Lake and other northern communities and regularly shows their beautiful, evocative, and sometimes strange works. I’m not sure how he ties into this program, but she also represents Canadian landscape painter Edward Epp, of whom I’m a big fan.

Trench is a small gallery with powerful shows. Mostly installation, sculpture, painting and mixed-media by local, Canadian and international artists. I like to visit whenever I’m in the neighbourhood because I know, whatever else, it’s going to be “good.” Really good.

There are two museums that I found emotionally overwhelming upon entering them for the first time, The Louvre, and the Barnes Foundation at its original location in Merion, Pennsylvania (the collection moved to a new modern building in Philadelphia in 2012). Albert Barnes was an American collector in the early 20th Century who championed the impressionists, post-impressionists and early modernists; Renoir, Van Gogh, Cezanne, Matisse, Picasso, Seurat, Modigliani, and many more. His mansion’s walls were packed from floor to ceiling with great masterpieces, and he strictly forbade reproductions of the paintings. Until the mid-1990’s when the Foundation allowed one book to be published on the works and the paintings were sent on tour to raise money to maintain the building, the only way to see them was to visit the museum. Entering the great room in the centre of the mansion was to experience sensory overload – one high wall was devoted to a Matisse tryptich, painted on location by the artist, a friend of Barnes, and the other three walls were blanketed by the brilliant colours of France as seen through the eyes of the greatest masters of the late 19th and early 20th century. Awe-inspiring.

I wandered into the National Gallery by accident. I didn’t intend on spending a long period of time inside having planned an extensive itinerary whilst visiting the capital. I was amazed that I was instantly face to face with art that I was familiar with (not being an expert in art history!) There was Van Gogh’s Sunflowers, Monet’s Water-Lily Pond, Seurat’s Bathers at Asnieres and lesser known art by artists like Picasso, Rembrandt, Cézanne which was impressive nonetheless. Similarly amazing was the building itself with its domes and mosaic floors.

My favourite gallery/museum experience was the massive Dali show at the Musée des Beaux Arts in Montréal. I was eighteen at the time, and both the show and the museum itself blew my mind. It was the sort of show, the sort of place where time has no hold. I think I stayed the entire day!

Choosing a favourite museum or gallery is a hard thing for me to do. I feel like I have fallen in love with almost every one I’ve ever been in. Maybe I could say its the Tate (London), which was the first foreign gallery I visited, the first time my teenage eyes viewed the masterpieces I had seen in books in real life. I was shocked by so much of what I saw, the depth, the texture, just how vast the differences between the real thing and the reproductions were. Or maybe I could say it was the Louvre (Paris), which was the biggest art information overload I’ve ever experienced—so how could that not make the list? But then there was the Musée Rodin (Paris) which was equally eye opening and contained an inner sanctum for Camille Claudel for whom I was particularly fascinated with at the time, and was a concrete/architectural nod to their relationship which was both fascinating and disturbing to me. But then I could just as easily choose MOA (Vancouver) which provides fascinating shows, often quite moving, on various cultures around the world and where my entire family, including our children, have enjoyed exposure to spoken word, dance, performance art and more right here where we live.