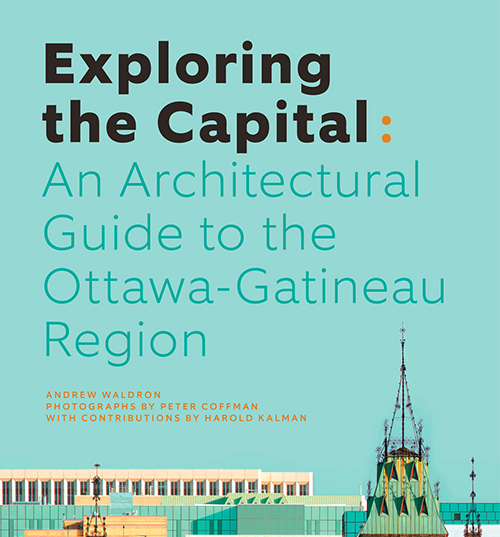 Introduction to “Exploring the Capital”

In advance of the release of Exploring the Capital: An Architectural Guide to the Ottawa-Gatineau Region by architectural historian Andrew Waldron, we are delighted to share an edited introduction to this comprehensive guide to the region’s great buildings.

Canada’s capital is a confluence of landscape, politics, ideas and language. At the shores of its rivers, Indigenous peoples, explorers, fur traders, armies and politicians crossed paths, eventually creating a capital representative of Canada. This boiling-pot frontier resulted in a diversity unique for a national capital.

Ottawa’s history reaches back long before Canada became a nation, to when it was inhabited by the Algonquin people, a branch of the Anishinaabeg. (The Odaawaa, who gave their name to the river, lived farther west.) Forming an alliance with the French, the Algonquins accompanied Samuel de Champlain up the Ottawa River in 1613 and prospered from the fur trade. Later, the Iroquois drove the Algonquin from their lands. As the fur trade declined, the lumber industry came, again feeding European markets and beyond, giving rise to the Ottawa Valley lumber barons who helped shape the region.

Two events made the region into something more than scattered settlements on the Canadian Shield: the British government’s decision to build the Rideau Canal and Queen Victoria’s selection in 1857 of Bytown as Canada’s national capital. Lieutenant-Colonel John By arrived in 1826, built the Rideau Canal as a defensive measure against the United States and laid out a townsite beside Barrack’s Hill. In 1841, Upper and Lower Canada joined as the United Province of Canada, with many cities vying to be capital. In a cunning political compromise, Bytown was selected and renamed Ottawa—the lumber town suddenly became a capital. A decade later, Confederation saw the formation of the Dominion of Canada.

In the following century, the national capital region enjoyed an exceptional wave of building that followed fashions and styles, especially embracing the romantic Châteauesque style created by the Canadian Pacific Railway. While other cities demolished and rebuilt, Canada’s capital is fortunate to have saved many landmarks and lost precious few.

Exploring the Capital offers you eleven unique tours throughout the region, including towns and villages beyond the cities of Ottawa and Gatineau. By no means is this book intended to be an exhaustive inventory of every building in the capital. The Internet and social media have broadened our knowledge and created a wealth of accessible information on historic places, and you can find more in-depth research and sources online for many of the locations marked in this book. We hope this book is only a beginning for learning. Compared to thirty years ago, citizens better understand and appreciate the capital’s heritage, and undoubtedly many facts that more knowledgeable people may raise have been overlooked. We hope nonetheless that we have captured the region’s best architecture and most interesting stories for both local residents and visitors. Ottawa has come a long way, from rough lumber town to cultured city enjoyed by guests from around the world. This guidebook will help you explore the richness of our capital.