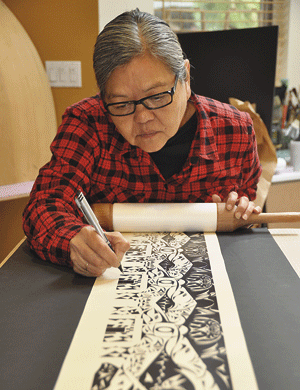 The exhibition, official book release, and sale will showcase one of the most comprehensive and important collections ever assembled. Many of the prints are among the rarest Northwest Coast images.

An exquisite hardcover limited edition, with slipcase and bound ribbon bookmark, will be available as well as the trade edition.

Reception is at 1.00pm with Susan Point in attendance.

Susan A. Point is a Coast Salish artist from Musqueam, a First Nation in Vancouver, British Columbia. Born in 1952, from childhood Susan has been taught the traditional values of her culture and legends of her people by her many aunts and uncles. Susan began her artistic career in January 1981 designing and creating gold/silver jewellery. At this time, Coast Salish art was an almost lost art form (due to European contact) therefore much of the native artwork produced and sold through various galleries and museums consisted of northern First Nations art. Eager to learn more about her own peoples art style, Susan chose to concentrate on the traditional designs and elements created by her ancestral artisans.

She has been awarded numerous public art commissions, including building facades and large sculptures in Canada and the U.S. She has been awarded the Order of Canada, in addition to a National Aboriginal Achievement Award, a YWCA Woman of Distinction Award, a B.C. Creative Achievement Award, appointed to the Royal Academy of Arts, was elected to the International Women’s Forum, and has received four Honorary Doctorates from the University of Victoria, Simon Fraser University, University of B.C. and Emily Carr University of Art and Design. 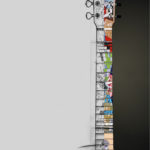