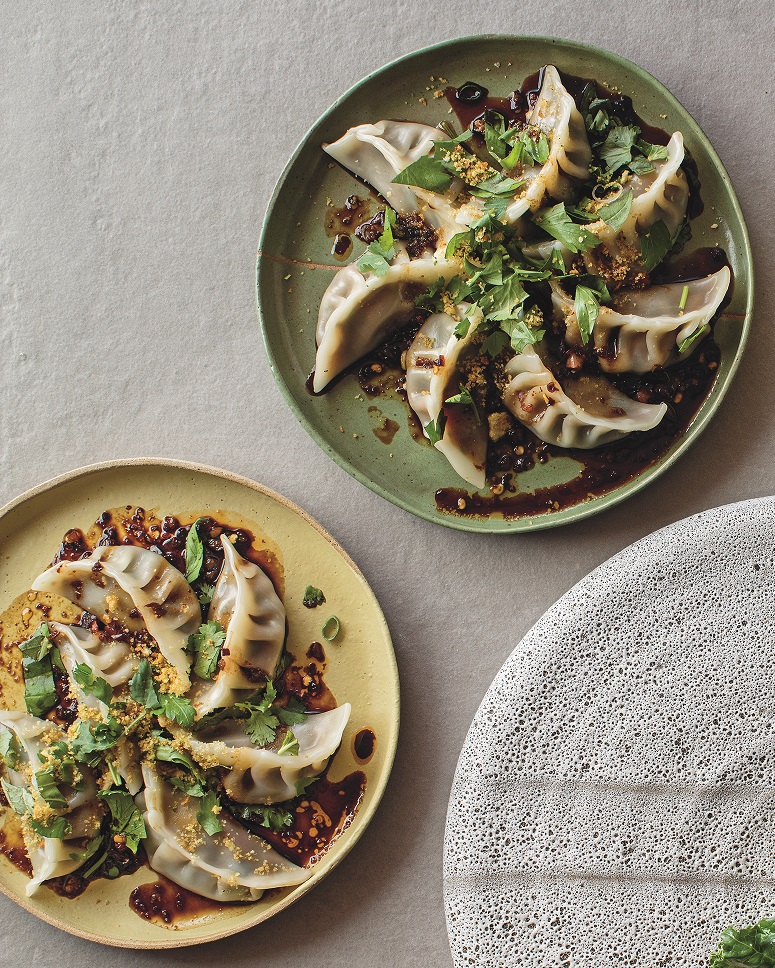 The lucky one is you—you get to eat these tender dumplings stuffed with all sort of savoury deliciousness. The key is to make sure the dumplings are well sealed so the filling doesn’t burst out when they are cooking.

4 Japanese eggplants, peeled and cut in half lengthwise

2 cups grape tomatoes, cut in half

Put shiitake and wood ear mushrooms each in a large bowl. Pour 4 cups of boiling water into each bowl and set aside for 30 minutes, until softened. Drain and discard liquid. Remove stems, then coarsely chop the caps.

Place eggplants on a baking sheet, drizzle with oil and season with salt and pepper. Roast for 10 to 20 minutes, until soft.

Meanwhile, heat 1 tablespoon oil in a large frying pan over medium-high heat, add mushrooms and sauté for 10 to 15 minutes, until soft. Season with salt and pepper. Set aside.

Wipe pan clean, heat another 1 tablespoon oil over medium-high heat, add onions and sauté for 10 minutes, until softened and translucent.

Remove eggplants from oven and set aside to cool. Mash, then drain out any extra liquid. Put them in a large mixing bowl, add all mushrooms (including king oysters), kale, tomatoes, cabbage, and konjac and mix well. Add garlic, basil and salt and pepper.

To make dumplings, place 1/2 tablespoon of filling in the middle of a wonton wrapper. Brush water around the edges of dumpling wrapper, then fold in half and crimp 5 to 6 times until sealed. Repeat until you run out of filling or wrappers.

Bring a large saucepan of water to a boil. Carefully lower dumplings into pan, working in batches of 6 pieces, and cook for 1 or 2 minutes, until they float to the surface. Using a slotted spoon or spider, transfer onto a plate or in a bowl. Drizzle with soy sauce and sesame oil and garnish with green onion. Serve immediately.

Note: Konjac is a tuber-like vegetable often used in Asian cooking, especially in Japan. It is sometimes called an elephant yam, although it is not technically a yam at all. It is the corm of a lily-like flower and is typically made into noodles called shirataki or into konnyaku, which is sold in a greyish block. Both are available in the fridge section at Fujiya.