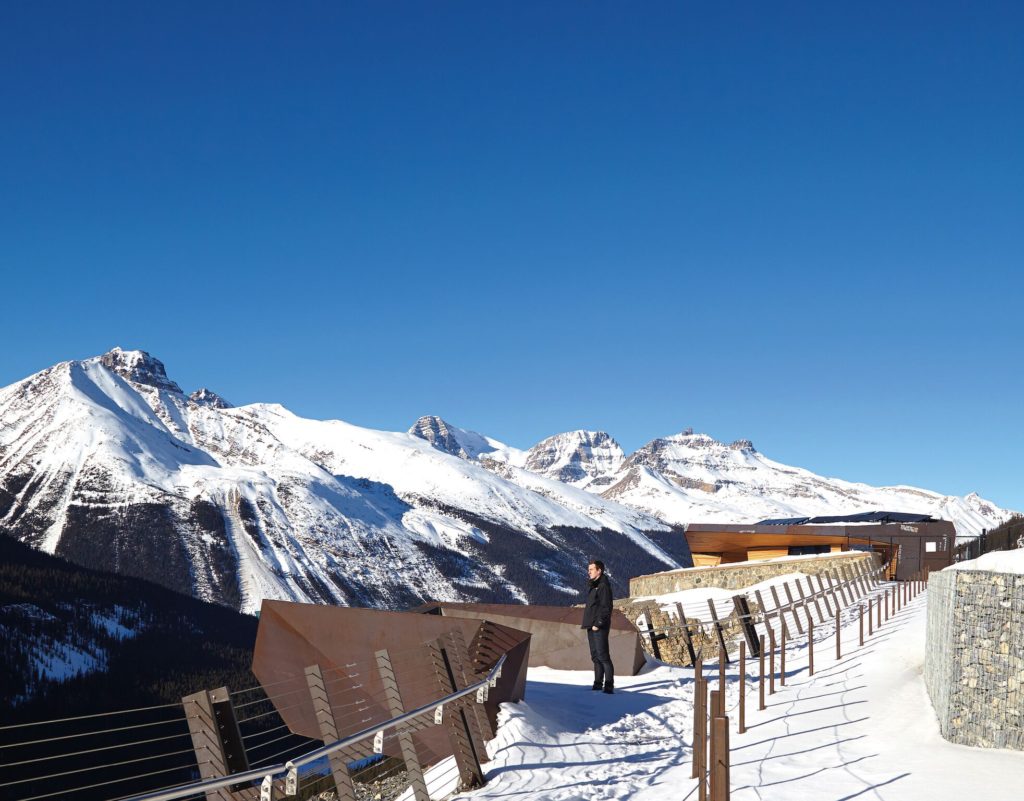 The following is the introduction from Glacier Skywalk by Clea Sturgess, Trevor Boddy, and Jeremy Sturgess, available April 2017.

by Clea and Jeremy Sturgess

Over the Sunwapta Valley, in the heart of the Rocky Mountains and at the apex of the Great Divide, a man-made structure balances from the edge of a cliff to give an unprecedented view of glacier, mountains and valley.

Virtually invisible from the Icefields Parkway, Glacier Skywalk’s cantilevered glass-floored walkway inspires simultaneous terror and delight when visitors realize they are suspended over a precipice with no visible structural support. This is the climax of a journey that winds its way along the mountainside, with stops that interpret, hide and reveal the astonishing natural surroundings.

The project began in the fall of 2010, when Brewster Travel Canada asked teams of engineers, architects and contractors to compete to create a vision for a new attraction on a site in Jasper National Park. Parks Canada had precipitated the idea for this competition through a call to companies like Brewster to envision new attractions that would encourage tourists to get out of the car and embrace nature and the realities of climate change.

PCL Construction Management and RJC Engineers invited Sturgess Architecture, known for innovative work in architecture and urban design, to design the project. Two important goals were to manifest the structure into a man-made extrusion of the landscape and to weave a series of macro experiences that would link the 300-metre distance from the bus stop to the Skywalk bridge as a journey in itself.

All members of the team were excited about the competition process, the scale, the context and the fairly unprecedented type of building, and this passion for the project inspired innovation and cooperation. The site offered a rare combination of natural setting to capture visitors’ interest and imagination, rich cultural and ecological history to inform the design and provide interesting learning opportunities, and previously developed land to minimize the impact of new construction.

The process that ensued was an extraordinary collaboration of client, Parks Canada and government personnel, consultants, contractors and manufacturers, each one a champion for what had become the project of a lifetime.