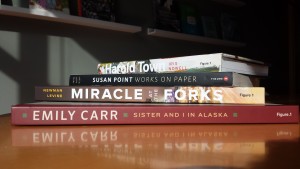 We’re pretty excited here at Figure 1 to have four of our art books shortlisted for the Melva Dwyer Award which recognizes excellence in a reference or research publication focused on Canadian art or architecture. We asked the authors of the four nominated titles to share their thoughts on being nominated:

“I am very honoured to be a part of the team that produced Susan Point – Works on Paper. The Spirit Wrestler Gallery was in the envious position of being offered a privately held collection of every print by Susan Point from 1981 to present. We took this opportunity to photograph the entire collection, and we knew that we also had the material for an important book. Susan Point has always been an innovative designer, moving between traditional and contemporary subjects, and modern themes such the environment and woman issues. Prints have have given her a voice to a wide audience beyond her many public art commissions. We were pleased to build a team that could represent this collection in book form – the entire staff at Figure 1 Publishing; author, Dale Croes; photographer Kenji Nagai; and Susan Point talking about her career in the arts. The books nominated for the Melva Dwyer Award is a powerful list of Canadian artists and writers and we are pleased to be recognized in such prestigious company.”

“Thrilled to be shortlisted? I’m over the moon – and particularly pleased to be up against the mighty Doug Coupland (hmmm …should re-phrase that?)”

Allan Levine – co-author of Miracle at the Forks

“A great honour for the book and for the remarkable story of the Canadian Museum for Human Rights.”

David P. Silcox – co-author of Emily Carr journal Sister and I in Alaska

“Emily Carr’s 2014 Dulwich show took London by storm and nothing could honour her more than receiving the Melva Dwyer Award for her 1907 diary of her Alaska adventure.”