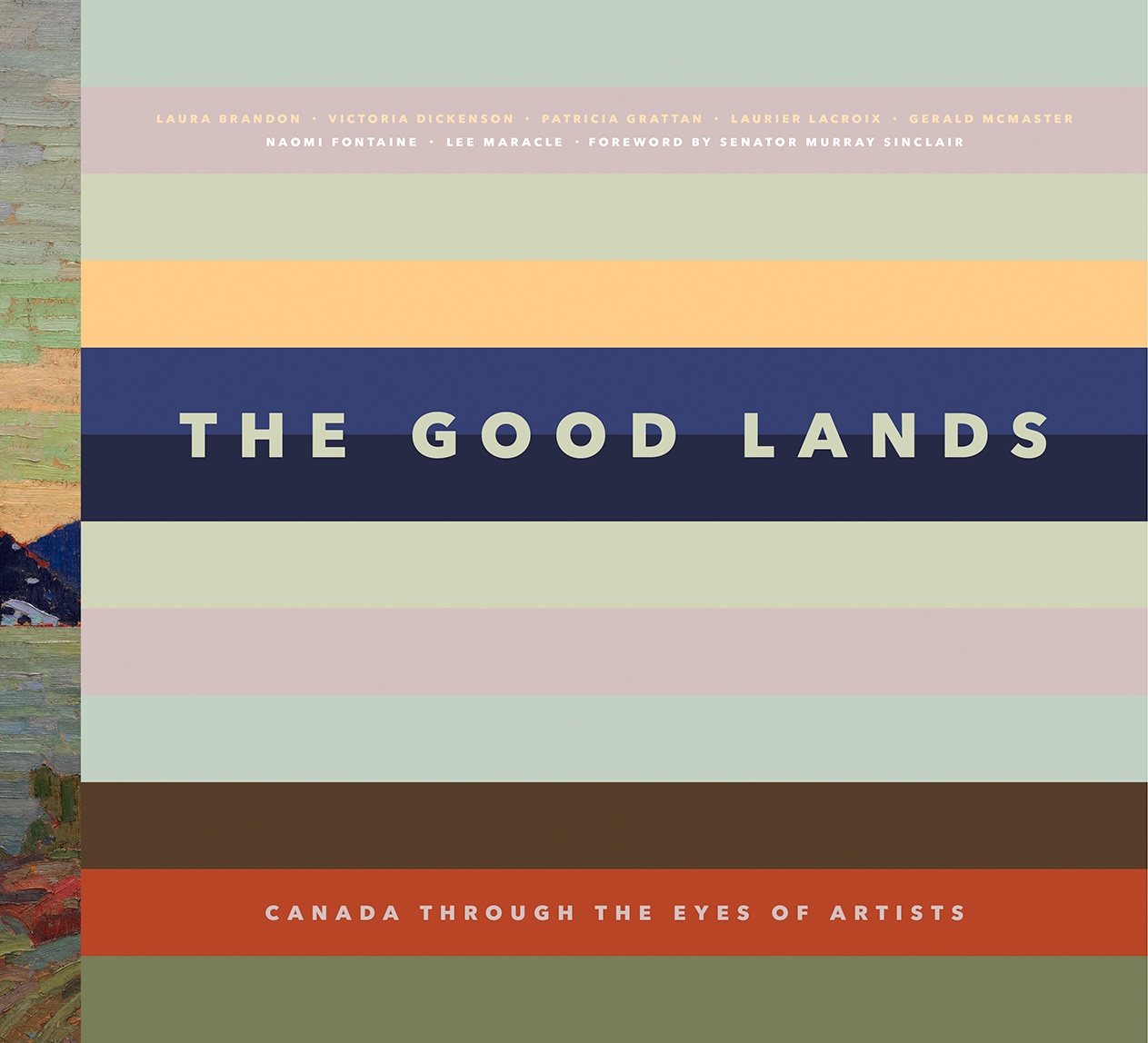 Canada Through the Eyes of Artists

Through the works of Canada’s artists—both Indigenous and non-Indigenous, historical and contemporary—we are invited to see our country with new eyes.

This book celebrates this country and honours the beauty and power of our shared spaces. In looking through the eyes of our artists, we are reminded that the land holds us, not we the land, and that we share our territories with other sentient beings, with trees and grass, with rocks and rivers. 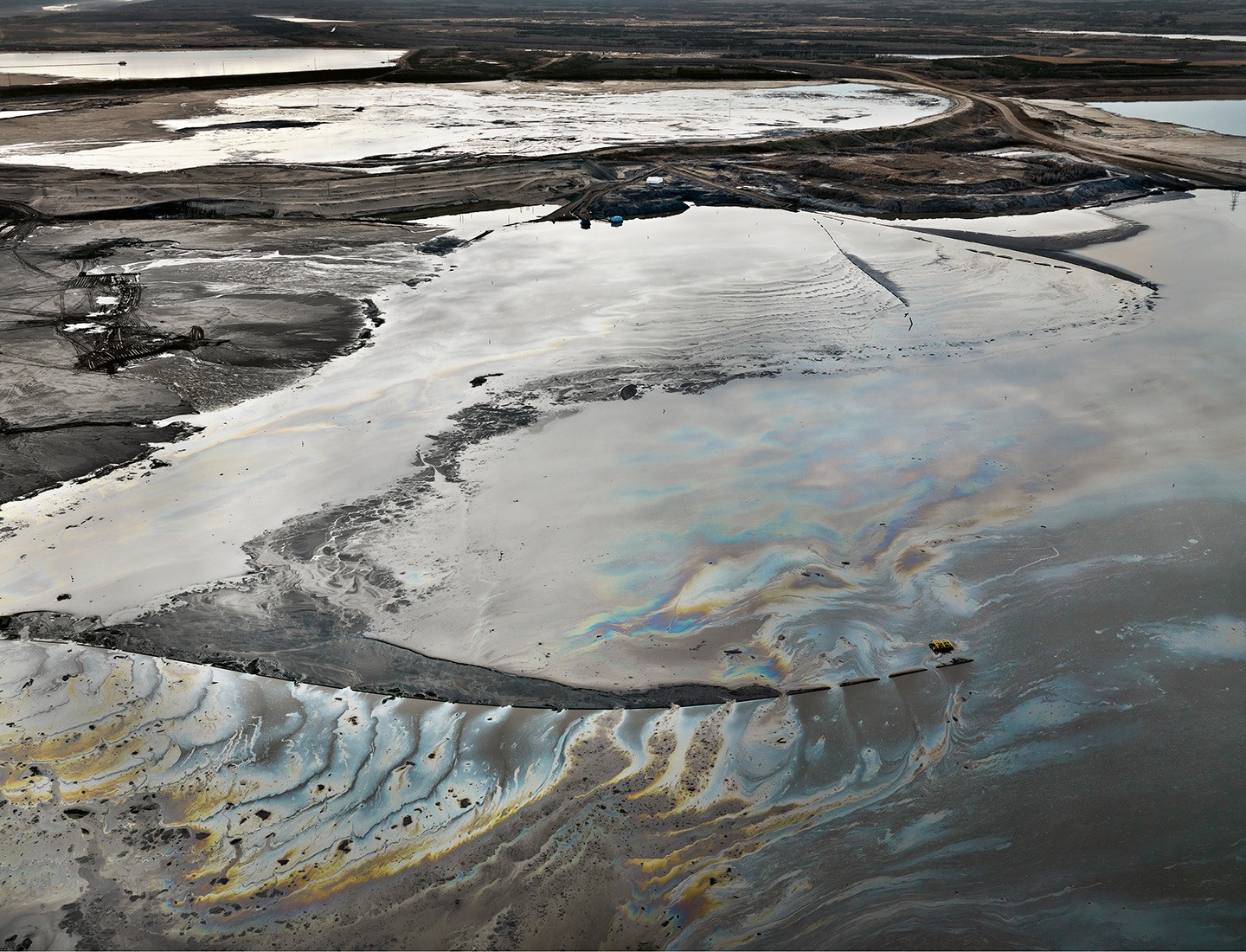 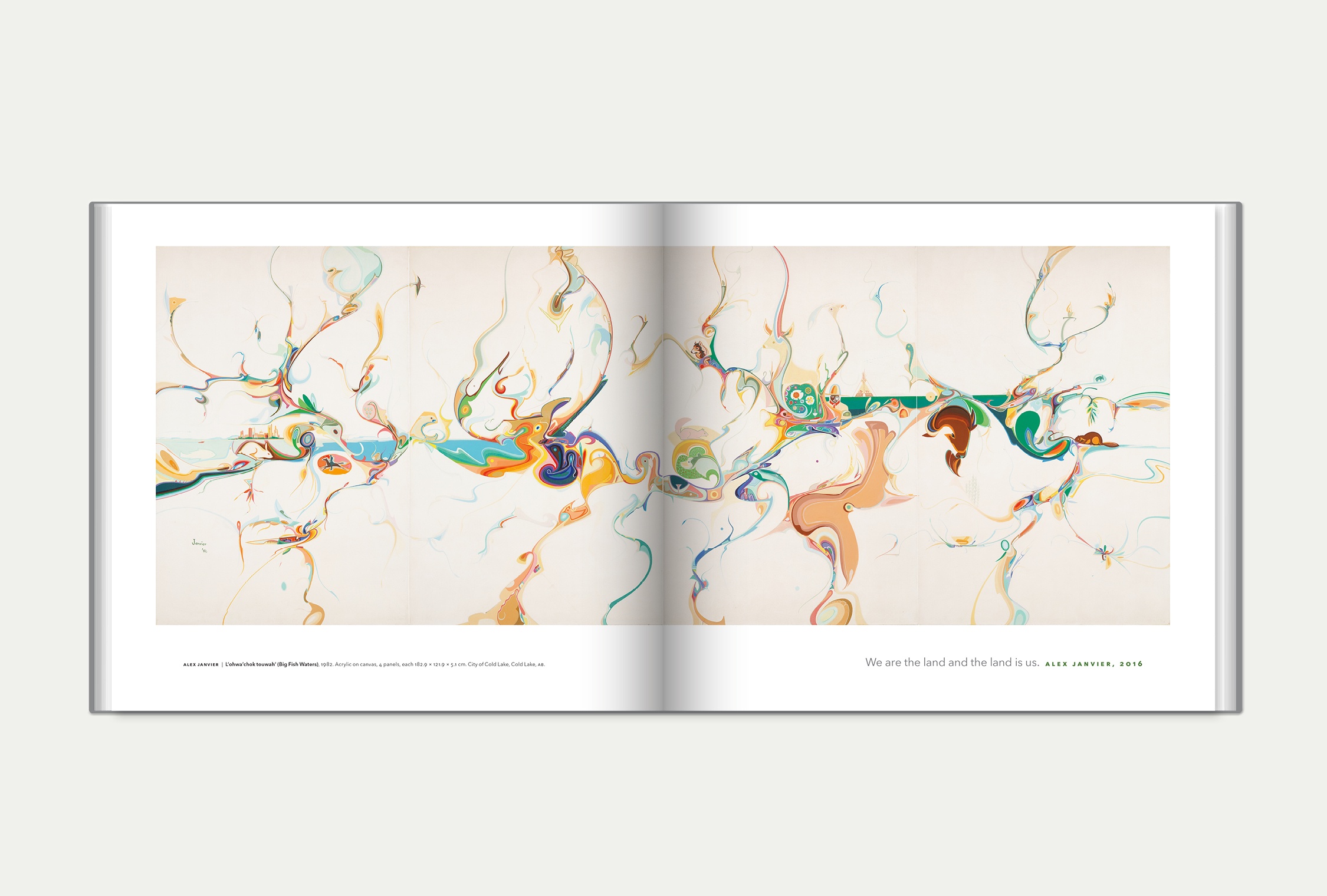 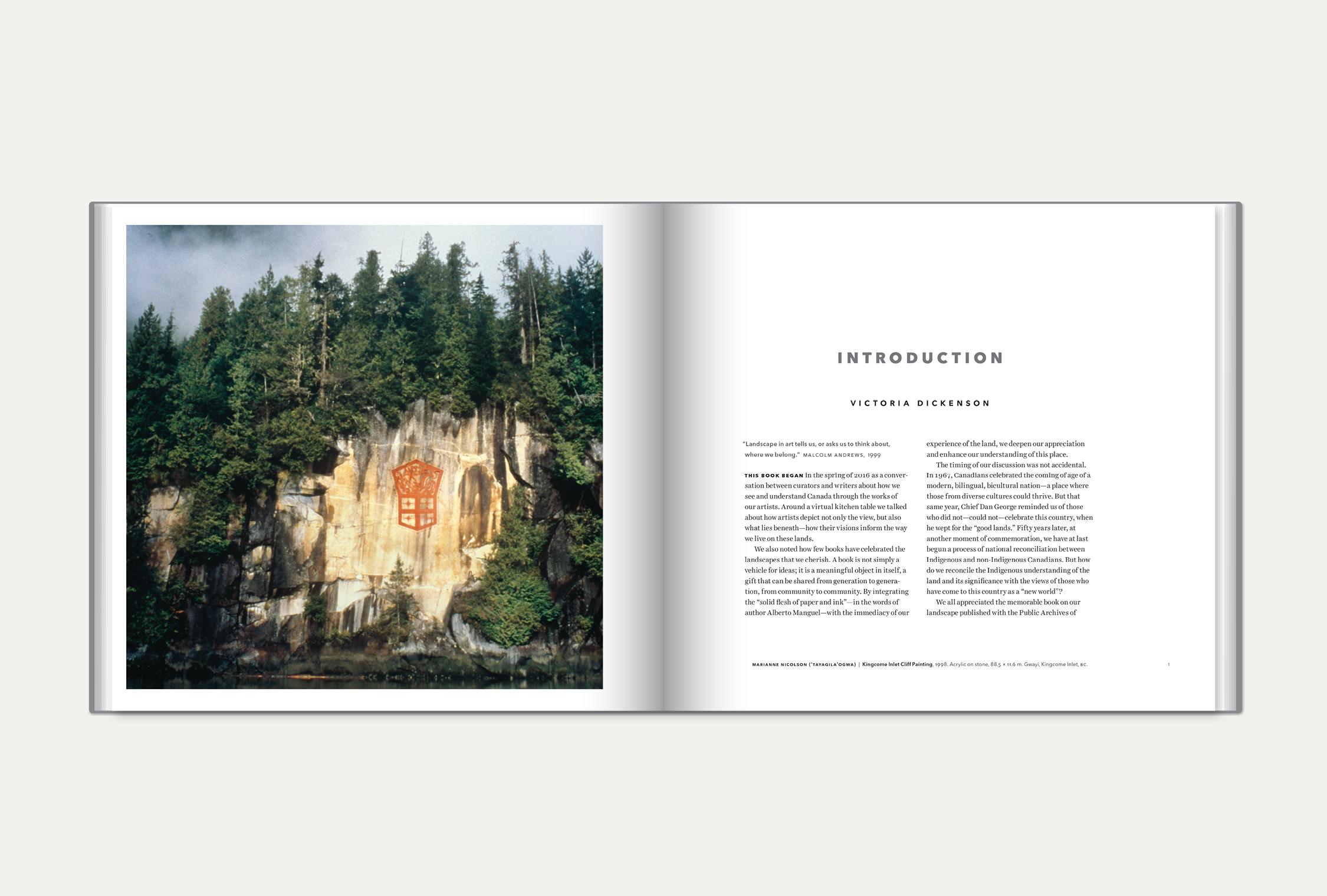 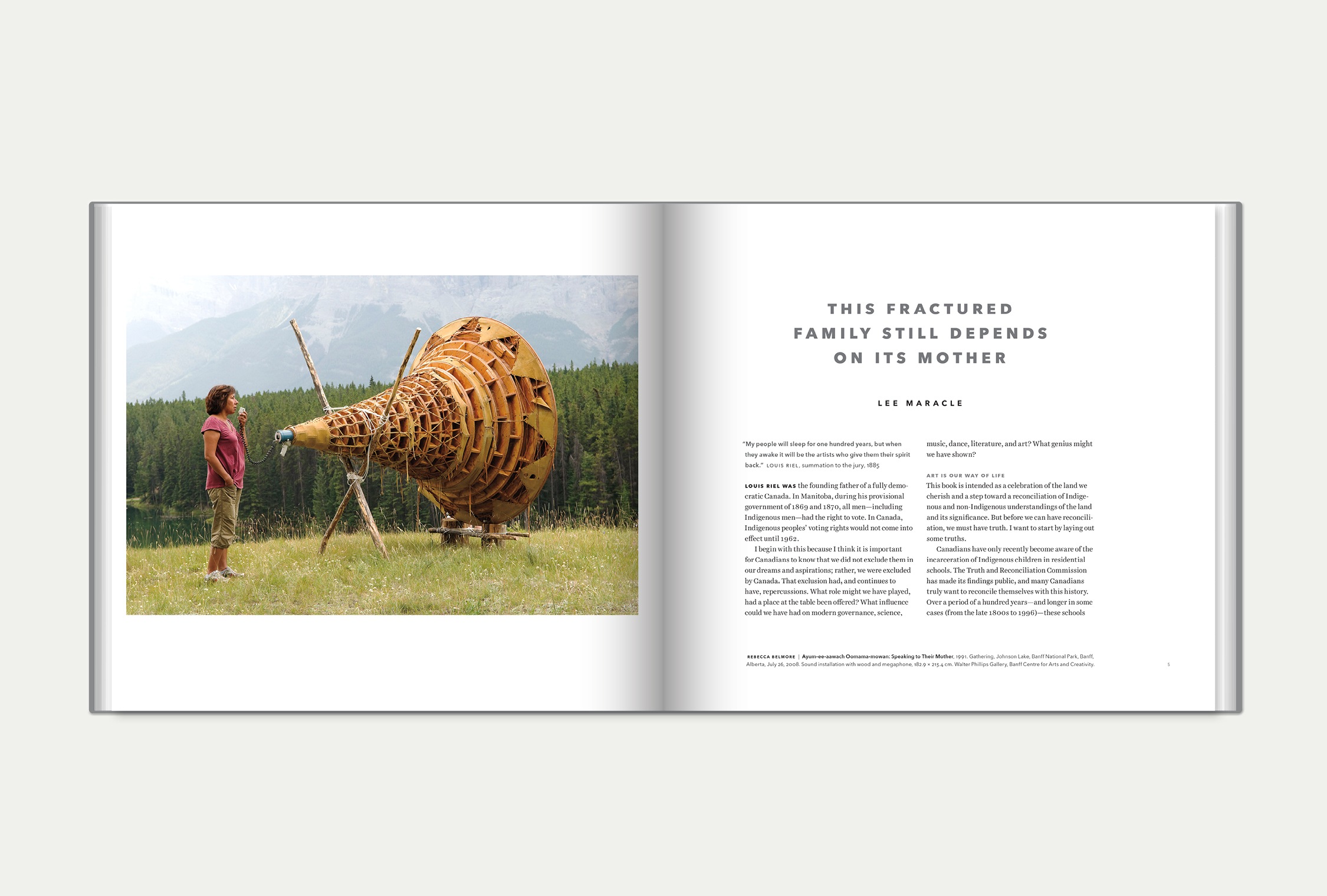 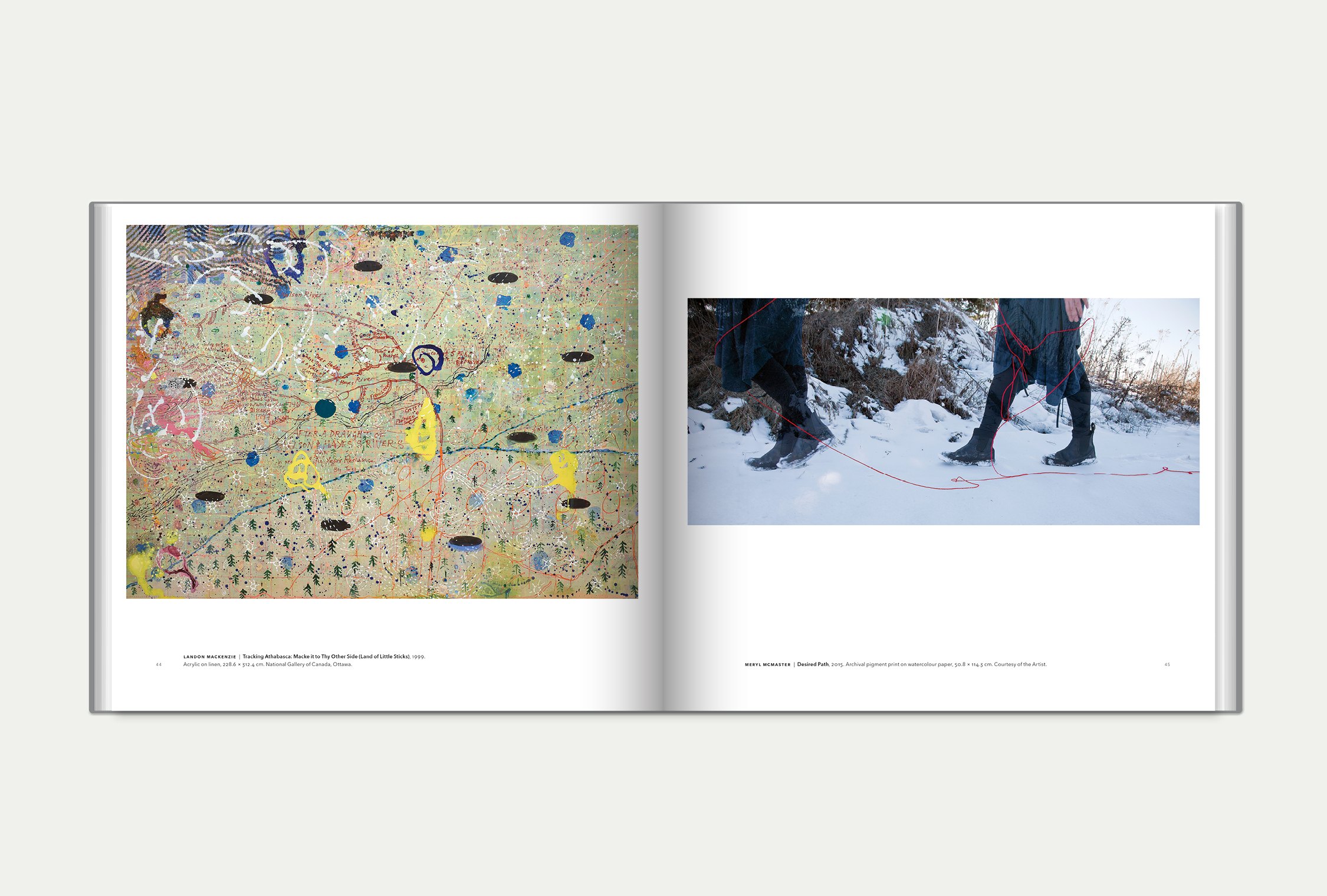 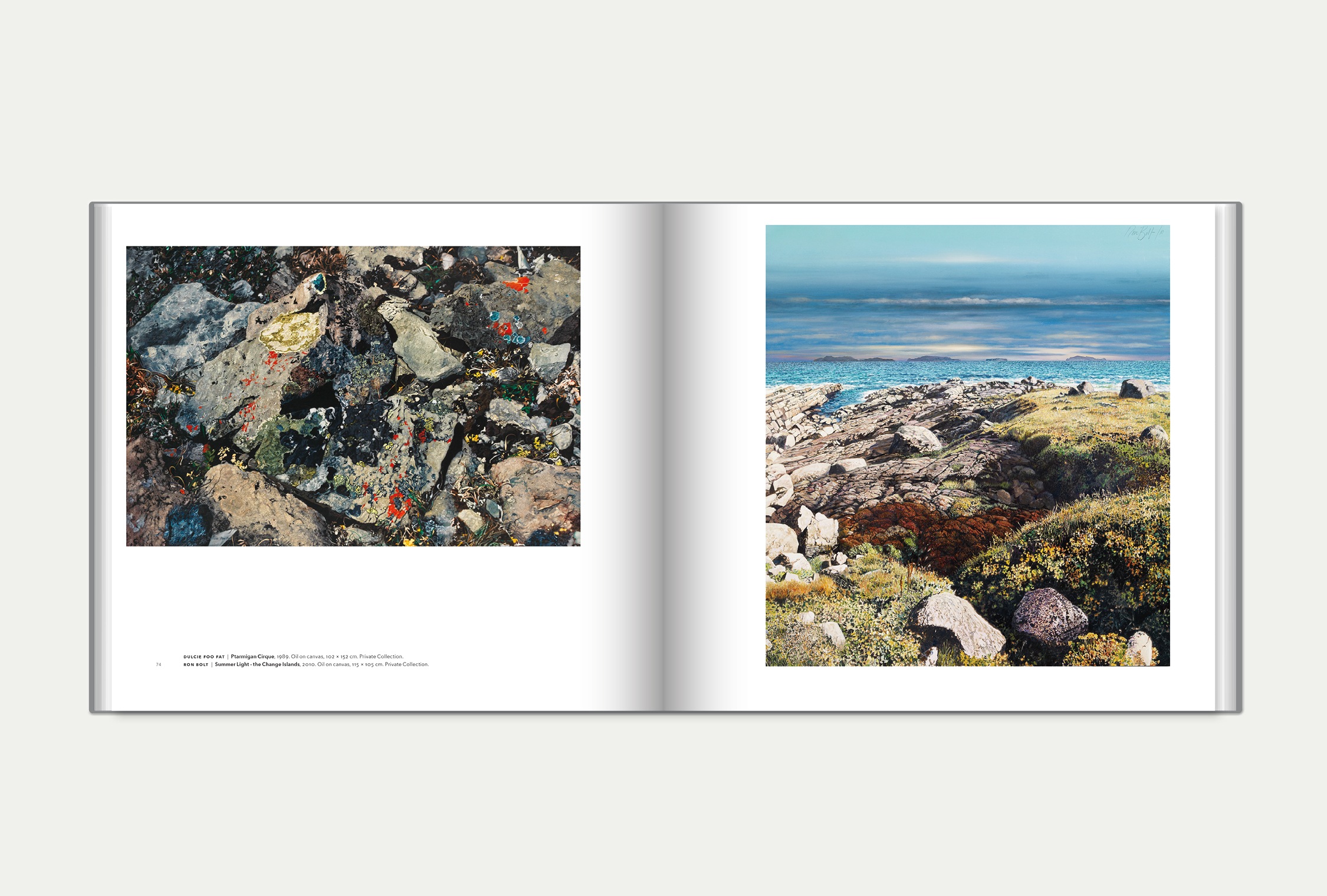 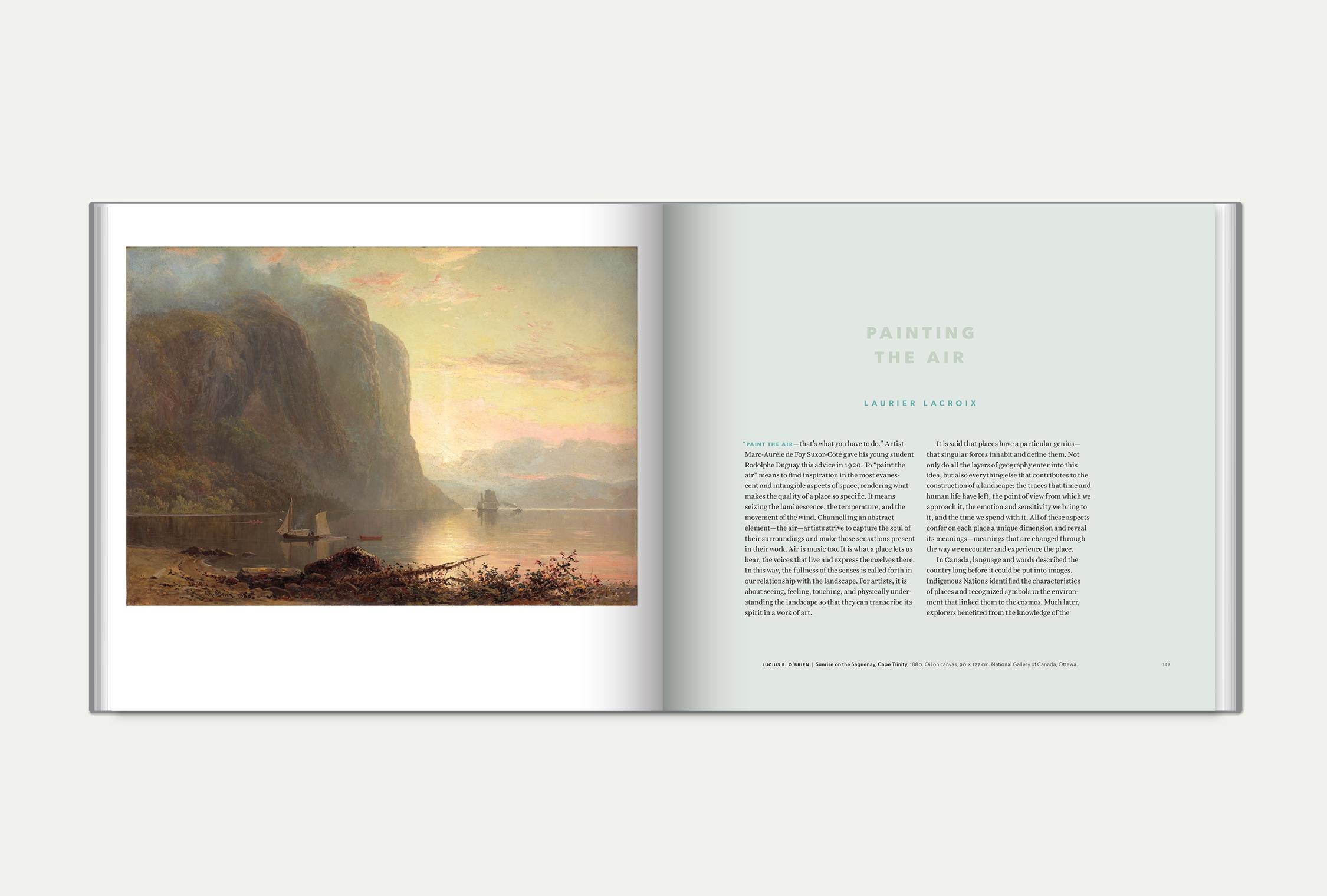 Fifty years ago, Canada celebrated its hundredth anniversary of Confederation. At Expo 67, in communities across the country, we celebrated our coming of age as a modern, bilingual, bicultural nation—a place where anyone from any culture could thrive.

But beneath the applause and the cheerful music was a darker note. In his public address at the festivities, Chief Dan George lamented what Canada’s centennial did not celebrate: the colonization and marginalization of Indigenous peoples who lived on these “good lands.” Now in the year of Canada’s 150th birthday, we honour a new understanding of our past. We have begun—at long last—to share in a process of national reconciliation and to come together to reimagine our contribution to a global future.

Artists give form and meaning to both the land and the invisible landscape of the spirit, both the past and the future. The works of Canada’s artists—both Indigenous and non-Indigenous, historical and contemporary—invite us to see our country and our place within it with new eyes. This book celebrates their visions, as well as the good lands we have shared and shaped for millennia that, in turn, have shaped us.

Dr. Gerald McMaster (Toronto, ON) is a Plains Cree and Blackfoot curator, artist and author. He is enrolled in the Siksika First Nation and currently holds the Canada Research Chair in Indigenous Visual Culture and Curatorial Practice at OCAD University in Toronto. Throughout his career, his championing of the mainstream value of Indigenous art, among other things, has led to his being chosen to serve as Canadian Commissioner for the 1995 Venice Biennale and as Artistic Director of the 2012 Biennale of Sydney. In 2005, he received both the Order of Canada and the national Aboriginal Achievement Award.

Dr. Laura Brandon (Ottawa, ON) is a freelance writer, curator and lecturer specializing in international and Canadian war art. From 1992 to 2015, she was Curator of War Art at the Canadian War Museum. She is currently an adjunct research professor in the School for Studies in Art and Culture at Carleton University in Ottawa, and is a research associate at the Canadian War Museum. She is co-author of Canvas of War: Painting the Canadian Experience (2000) and is currently completing a book on the Group of Seven and war. She was appointed to the Order of Canada in 2015.

Dr. Laurier Lacroix C.M. (Montreal, QC) is professor emeritus of the Faculty of Arts at the University du Québec à Montréal, where he taught art history and museum studies. His research interests focus on public collections and art from Quebec and Canada before 1940. Among his accomplishments are numerous exhibitions and catalogues, such as Painting in Montreal between 1915 and 1930 (1996) and The Arts in New France (2012), as well as retrospective exhibitions devoted to Ozias Leduc (1978 and 1996) and Marc-Aurèle de Foy Suzor-Coté (1986 and 2002). Lacroix received the Prix Carrière of the Société des musées québécois (1997) and the Prix Gérard-Morisset (2008) from the Quebec government. He is a member of the Société des Dix and the Académie des lettres du Québec.

Lee Maracle (Toronto, ON) is a prolific First Nations writer and expert on First Nations culture and history. She is a member of the Stó:lō Nation, the daughter of a Métis mother and Salish father, and a granddaughter of Chief Dan George. Maracle’s first book, the autobiographical novel Bobbi Lee: Indian Rebel (1975, 1990), was one of the first Indigenous works published in Canada. Maracle has held numerous academic posts in Canadian and American universities, and, in 2009, she received an Honorary Doctor of Letters from St. Thomas University. She is a co-founder of the En’owkin International School of Writing, a learning institute in Penticton, British Columbia that houses an Indigenous Fine Arts Program and an Okanagan Language Program.

Naomi Fontaine (Quebec City, QC) is a young Innu woman from the community of Uashat, near Sept-Îles, Quebec. She studied to be a high-school French teacher at Université Laval in Quebec City. Her first collection of poetic stories, Kuessipan, was published in French in March 2011 and in English in 2013 (translation by David Homel). The Quebec booksellers’ magazine Le libraire named Fontaine “Discovery of the Year,” and she was part of Elle Québec’s Women of the Year in 2011. She currently writes a blog, Innushkuess.

Patricia Grattan (St. John’s, NL) is a curator, writer and consultant primarily based in St. John’s. From 1983 to 2003 she served as Director and Chief Curator of the Memorial University of Newfoundland Art Gallery. She was also a National Gallery of Canada Research Fellow from 2005 to 2006, examining links between landscape art and the practices and politics of geology in Canada from 1800. She is the author of City Seen: Artists’ Views of St. John’s, 1785–2010, named Newfoundland and Labrador’s best Heritage and History Book of 2013. In 2012, she received the Royal Canadian Academy’s Medal and was inducted into the Newfoundland and Labrador Arts Council Hall of Honour.

Victoria Dickenson is former Director of the McMichael Canadian Art Collection in Toronto, as well as President, McMichael Canadian Art Foundation. She inaugurated the post of Chief Knowledge Oﬃcer of the new Canadian federal institution, the Canadian Museum for Human Rights in Winnipeg, Manitoba in 2009. For eleven years, she was Executive Director of the McCord Museum of Canadian History in Montreal. She has also served as Director, Programs, at the National Aviation Museum and Chief Curator of the Newfoundland Museum. She is an Aﬃliate of McGill University History Department, and an Adjunct Research Associate in inclusive Design at OCADU. She has curated numerous exhibitions and has written extensively on documentary art and the visualization of landscape in North America.