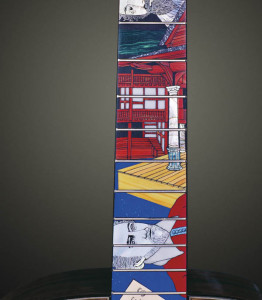 When the theme is very general, or an all-encompassing subject, I have as many conversations as possible with my client, trying, as I’ve said before, to distill their novel’s worth of ideas down to a focused narrative. Here is another of those instances where the theme could head me off in multiple directions.

My client was inspired by a recent visit to the newly rebuilt Globe Theatre in London, England, and had decided on a William Shakespeare theme. The mind reeled: characters from the Bard’s plays? His sonnets? His acting company? His life and times? Where would I start?

The emails and phone conversations with my client stretched over four months. That process didn’t result in a definitive overall design direction, though it did confirm elements that my client wanted me to consider incorporating:

Some of these instructions were clear and specific; others were simply thoughts, indicative of what my client found appealing. In sum, they formed my starting point.

As is my habit, I began by reading all I could about the subject: William Shakespeare, his personal life, his writing, his company of players, the politics and social mores of his era. Information was easily found, and I relished exploring and learning—and discovering. I left my mind open to any and all ideas that might occur while reading and viewing the images. What surprised me was that no collection of Shakespeare’s plays was published in his lifetime. The famous title page to his folio Comedies, Histories & Tragedies, with the iconic engraved portrait, was the first published collection, and he wasn’t alive to see it. I encountered this fact very shortly after viewing pictures of his birth house in Stratford, which must have been about when the birth-to-death narrative arc first occurred to me.

My client and I shared the same idea of placing a full portrait of Shakespeare in the headstock. I pictured his birth house somewhere behind him in the scene. Thus would begin my narrative, at the very top of the headstock, all going well. First, though, I needed to select one of the portraits.

Some years before, out of curiosity, I had read a book titled Shakespeare’s Face by Stephanie Nolen. This book told the story of the 2001 discovery of what appears now to be the only portrait of Shakespeare painted during his lifetime. The small canvas, painted by a John Sanders and examined and tested and ultimately authenticated over the last fourteen years, is now simply referred to as the Sanders portrait, and it has become the hot topic among Shakespeare scholars. Particularly amusing to me was that it was (re)discovered in the private home of a descendant of Sanders: Lloyd Sullivan, of Ottawa, Canada. How could I not use the Sanders portrait for my inlay? It held the perfect mix of intrigue and Canadian connection.

With the portrait and a view of Shakespeare’s birth house in the headstock, my coalescing narrative then sent me to the end of the fretboard—the end of the story—to include something connected with his death. This was the moment when I reminded myself that the famous first folio collection of his plays was published after his death. I looked again at the folio’s cover page. It had the bonus of the engraved portrait. (We now know it very likely doesn’t resemble him, especially in light of the Sanders portrait, but the image has been identified with him for more than four hundred years, so it wasn’t easily ignored.) I made a photocopy of the cover page and began playing with angles as I positioned it on the fretboard until I found the sweet spot where enough of the title text and the engraved portrait were in view to be recognizable.

It appeared that I had my bookends to the story. It was now time to think about the middle. In fact, some of the middle story (which I was now thinking of as the second act of the play) had already been suggested by my client. He proposed including the rebuilt Globe Theatre and had sent me some photos he’d taken during his recent visit, although they didn’t quite show enough of the thrust stage and its pillars, the open-air wooden construction, etc., the key aspects of the theatre. But while searching online for additional views, I stumbled upon engravings and woodcuts of the original members of Shakespeare’s acting company. I recalled this troupe being called the Lord Chamberlain’s Men, but could I find a portrait of this lord? Sure enough, there was more than one portrait. I liked the idea of including the man who had essentially financed Shakespeare, and I wondered if there was anyone else critical to the theatre that I might include.

I went back to the description of the actors in the company. Perhaps I could show one of the men dressed as a woman? Maybe. Could be fun. Then I read about Richard Burbage. This man premiered more of Shakespeare’s leading roles than any other actor. However, there were no images of Burbage in the books I had. I went online and found one single portrait—but one was all I needed. I sketched in Lord Chamberlain and Burbage on either side of my selected view of the Globe. Given that they represented two different but no less critical aspects of the functioning of the theatre and its acting troupe, I liked the symmetry of placing them alongside the theatre.

It was time to take stock. I had covered Shakespeare’s birth, put in a symbolic connection to his death, and included his authenticated portrait as well as his most iconic image. The Globe was there, along with his patron and leading actor. Was I done? I returned to my earliest notes, as well as the stack of printed emails from my client, and was reminded that he had ultimately settled on a line from Sonnet XXIX that he wanted me to incorporate: “Haply I think on thee.” I selected a font actually called “William Shakespeare.” Created by The Walden Co., it was florid but seemingly authentic. It would make for an attractive graphic. I was playing with its size and the location of the wording when another memory popped up.

It appeared that Shakespeare’s earliest published work was not one of his plays but one of his poems titled Venus and Adonis. So, it occurred to me that if I showed the title page of that publication and slipped it behind/beneath the quoted phrase from Sonnet XXIX—and placed it between the headstock portrait and the Globe Theatre section—I would more convincingly, more completely, create my narrative arc.