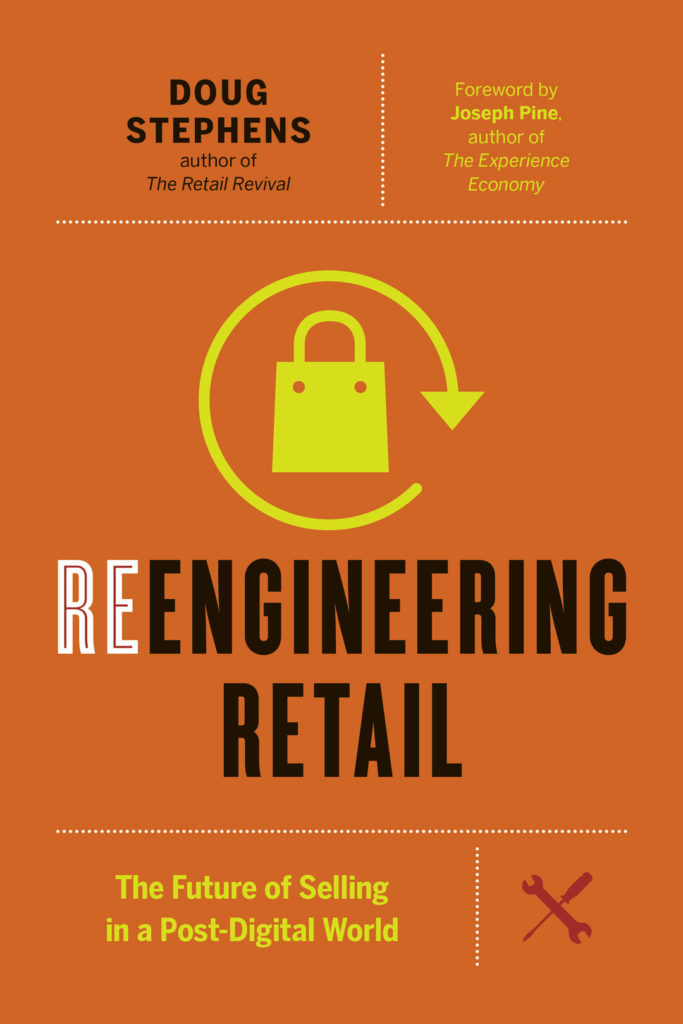 The following excerpt is taken from Doug Stephens’s book, Reengineering Retail: The Future of Selling in a Post-Digital World, available now.

“Software eats retail.” This was technology investor Marc Andreessen’s moribund epitaph for the retail industry in a January 2013 interview. Andreessen, the co-founder of the web browser Netscape Navigator, is also one of Silicon Valley’s most influential investment gurus and one-half of the eponymous venture capital powerhouse Andreessen Horowitz. His company has interests in an array of Internet technology firms, including Facebook, Airbnb, Twitter and Pinterest, to name only a few. He also sits on the boards of Facebook and Hewlett-Packard and has spent decades as a technology practitioner, innovator, investor and advisor, triangulating the future of the web and betting big on what he sees coming next. Moreover, he has a reputation for doing so with alarming acuity. Consequently, when he clears his throat to speak, people tend to sit up and listen, hoping to catch even a momentary glimpse into his deadly accurate crystal ball.

Not one to mince words, he summed up his industry outlook by saying, “Retail guys are going to go out of business and ecommerce will become the place everyone buys… Retail chains are a fundamentally implausible economic structure if there’s a viable alternative. You combine the fixed cost of real estate with inventory, and it puts every retailer in a highly leveraged position. Few can survive a decline of 20 to 30 percent in revenues. It just doesn’t make any sense for all this stuff to sit on shelves. There is fundamentally a better model.”[1]

The interview had barely pixelated on Twitter before sparking a firestorm of debate. Industry analysts, pundits and even retail executives themselves began offering up ammunition on both sides of the argument.

Some felt that Andreessen’s comments were utter bullshit and not much more than the bluster of an investor with an obvious and vested financial axe to grind on behalf of the technology companies he was so deeply involved with. They pointed to the impossibility of a retail world without “retail guys,” as Andreessen called them. They decried pure-play online retail as a failed business model being propped up by endless streams of venture capital that, in the end, would collapse under its own weight.

Others took a very different view, falling in line behind him and pointing to the disastrous impact of technology on other verticals, such as the brick-and-mortar travel industry—an industry that had been all but laid to waste by online travel options. They pointed to the downfall of businesses like Blockbuster, which once held almost 30 percent market share in the video rental market and yet was wiped off the face of the Earth by Netflix and video on demand in little more than a decade. They called out the retail industry incumbents for their failure to meet the pace of progress around them.

To their point, within a little more than two hundred years we’ve witnessed the following technological innovations become things we simply take for granted.

Technological progress and its impact on humanity has been staggering. How many of us could possibly imagine a world without these things? And yet, in the face of all of this, the concept of retail and how it’s carried out hasn’t changed much at all. The way we go to the store, browse products and pay for those products is essentially the same today as it was two hundred years ago. Sure, we don’t use a horse and buggy to deliver goods anymore and cash registers don’t have bells, but the core economic model for how retailers buy products and sell those products to consumers is the same in almost every respect as it was in the mid-1800s. Those in Andreessen’s camp were right to wonder, how could retail possibly be so out of sync with progress on most other fronts?

I decided to take a somewhat less passionate approach to the debate. After all, I had no dog in this fight, and it felt to me that there were merits and flaws in both arguments.

First, the pundits and analysts of today pointing to pure-play online retail as an emperor without any clothes sounded oddly reminiscent of the voices that dissented when Bill Gates dreamed that one day there would be “a computer on every desk in every home.” They were skeptics who cited what was obvious at the time: that computers were onerously complex and costly. However, they, like most naysayers throughout history, were mired in parochial thinking and overlooked the combinatorial and exponential nature of innovation. The cost of computers, of course, has dropped precipitously, and they can now be used by toddlers without instruction—something Gates clearly foresaw, but that completely eluded many of his critics.

Similarly short sighted, the former head of Blockbuster, John Antioco, suggested in 2000 that Netflix was destined to remain a “very small niche business.” At the time, of course, he was right. Netflix was a comparatively small mail-order video business with less than 10 percent market share. What Antioco missed, however, was the exponential potential for streaming entertainment that would turn Netflix from a minor distraction into a catastrophic disruption. To suggest that pure-play online retail is unsustainable based on a quarterly report from Amazon today would be no less myopic or near-sighted.

On the other hand, it also seemed to me that to suggest a future absent of any physical retail was to negate the human essence of shopping and reduce it to a passionless matter of mere product acquisition. And suggesting that “ecommerce will become the place that everyone buys” sounded eerily like analysts’ predictions for big-box retail two decades ago, when they characterized it as an unstoppable business model. Yet today, big-box retail is coming apart at the seams. Was it not conceivable that a similar fate could await today’s online incumbents?

So what was the truth? Beyond the hyperbole and the binary predictions on both sides, where was retail headed? What would the “store” of the future really look like, and how could retailers across the spectrum adapt and survive what was coming?

This is what I set out to understand.

What I have discovered is that what lies ahead is infinitely more amazing than we could have imagined. Every aspect of how, where, when and even why we shop is about to change entirely. Online or offline—retail is on the precipice of a historic reinvention that will leave both digital and physical retail barely recognizable in comparison to the way we shop today. Even the centuries-old formula through which retail companies make money—the core economic model—is going to be shape-shifted beyond recognition and with it, the very concept of what a store is and what it does is going to be rewritten.

Marc Andreessen was right that January day. Retail was indeed going to crash and burn. But out of its smoldering ashes an entirely new and amazing industry was about to be born.