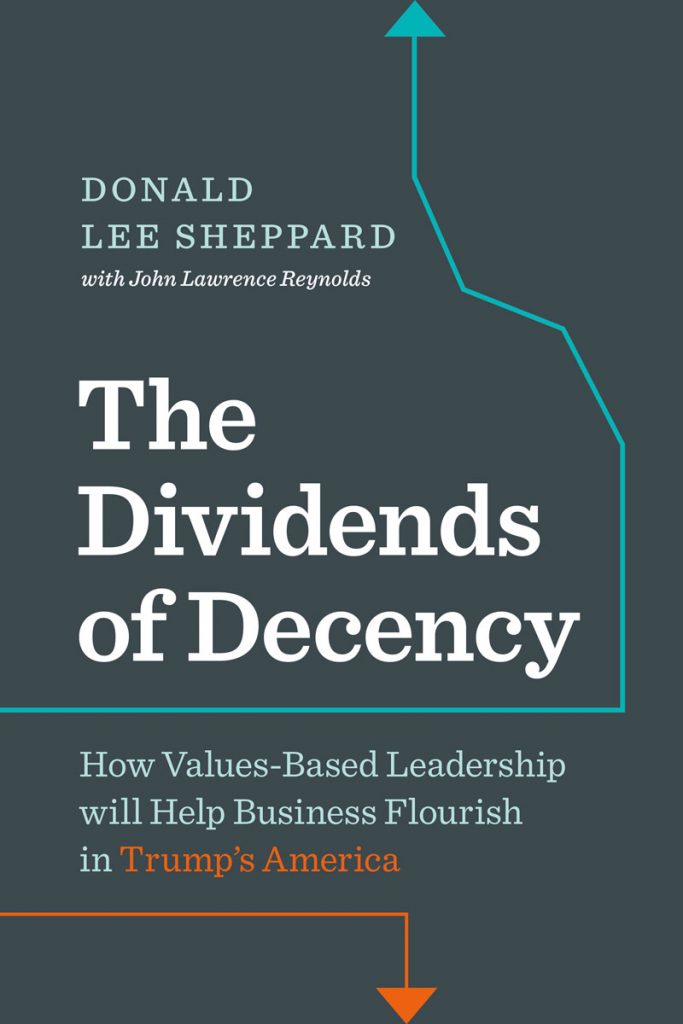 Excerpt: “The Dividends of Decency” Prologue

Available May 2018, The Dividends of Decency is a timely reminder of what is truly important in business, and a guide to values-based leadership that will help American business indeed be great again—by being ethical, accountable and sustainable. Here’s an exclusive abridged version of the prologue.

Yes, another book decrying the fact that the United States of America, the bastion of freedom and justice, chose Donald J. Trump as its president.

But this book is different.

There are many reasons to go on record denouncing Trump’s various failings and how they are in direct conflict with this country’s values and traditions. I’m dealing here with the one that risks making a deep and indelible impact on the manner in which business is conducted in the United States: his ethics. (Correction: his lack of ethics.)

Trump’s misogynist attitudes, tolerance of racist and extreme right-wing groups, narrow vision, autocratic style and general demeanor have outraged me as much as any other American, not to mention the rest of the world. This is in addition to his ignorance of the way the U.S. federal government functions, his insulting attitudes to various American allies and economic partners, and his general incompetence at achieving anything except eliminating the achievements of his predecessors. Sheesh.

Trump has also made it clear, from his words and his actions, that he has a complete disregard for doing business in a principled way. His many millions of dollars have been made, several times over, at the expense of others and of the system—the written and unwritten rules of business. The worst part is not that he has been successful despite his bluster and disdain for business ethics (although that’s bad enough) but that his public endorsement of success at any cost—and now his endorsement of this from a position of incredible power—will rub off on others and lower the bar generally on how business is done in this country. The risk of this—in both the short term and the long term—cannot be underestimated and could represent one of the darkest corners of Trump’s legacy.

To whatever extent Donald Trump extends his influence, his unprincipled actions threaten to lower the level of ethics and values in America below its already diminished point. Nothing in the man’s background suggests that his standards approach the level we have a right to expect from our leaders. Americans, like every society down through history, are influenced by the values and deeds of their leaders. Good and bad actions of leaders are absorbed and emulated by those whom they govern. Citizens of democracies such as the United States are as vulnerable to this form of influence as any society, and I worry that because Trump is a businessperson first and foremost, his negative influence may affect corporate America in particular. Are we at risk of our future business leaders thinking that Trump is the paragon of power and entrepreneurial success? Will they justify shady or unethical behavior on the basis that, if our president can ignore basic principles to reach the top, anything goes for anyone? Do we really want our corporate leaders of tomorrow to believe that the end justifies the means?

The prospect frightens me, just as much as it should frighten other Americans who value what this country stands for. American business is the engine of our economy and a key driver of our country’s power and influence on the world stage. Nothing could damage that position more than a decline in our corporate standards of decency, honesty and integrity. We’ve seen it happen with the financial crisis of 2008 and with other corporate scandals, but it is my belief that with Donald Trump in the White House, the decline in ethics will be even more precipitous, making a negative impact on our country’s future generally and rubbing off on corporate America specifically.

I am here to tell you that there is a better way—a more principled path to leading a company and a country. I’m speaking as a businessperson who achieved success without resorting to or even contemplating some of the tactics that Donald Trump has employed over his career. I believe that the vast majority of successful and dedicated businesspeople feel as I do: if you can’t make it in business by maintaining a reasonable degree of ethics, find something else to do. Those of us who built and operate businesses that treat employees fairly and contribute to the wealth of communities generally need not only to disagree publicly with Trump’s way of doing business but need also to take action to mitigate the impact his influence can have on this country.