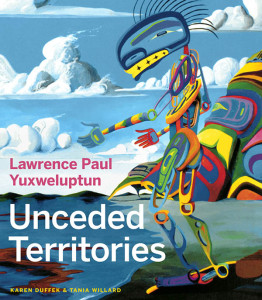 We’re delighted to announce that Lawrence Paul Yuxweluptun: Unceded Territories, the major retrospective of one of Canada’s most exciting and brilliant contemporary artists, is the winner of the 2016 City of Vancouver Book Award.

Artist Lawrence Paul Yuxweluptun and editors Karen Duffek and Tania Willard were presented with the prize on Monday evening at the 2016 Mayor’s Arts Awards.

Lawrence Paul Yuxweluptun: Unceded Territories, copublished with the Museum of Anthropology at UBC, presents Yuxweluptun’s political and visually stunning art with astute and accessible discussions of the politically charged and aesthetically complex dimensions of the artist’s work.

Produced for a major exhibition of Yuxweluptun’s work, the book frames 30 years of the artist’s grappling with the complicated intersection of colonial suppression, politics, environmentalism, indigeneity, and activism on unceded territories. As the City of Vancouver works to move towards reconciliation with local First Nations and the urban Aboriginal community, the book provides a timely challenge to the notion of what Vancouver is.

You’re invited to join Lawrence Paul Yuxweluptun at the Vancouver Public Library’s event featuring the winner of the Book Award on Thursday, October 13 at 6:00pm at the CBC Studio 700. This event is free and does not require registration.