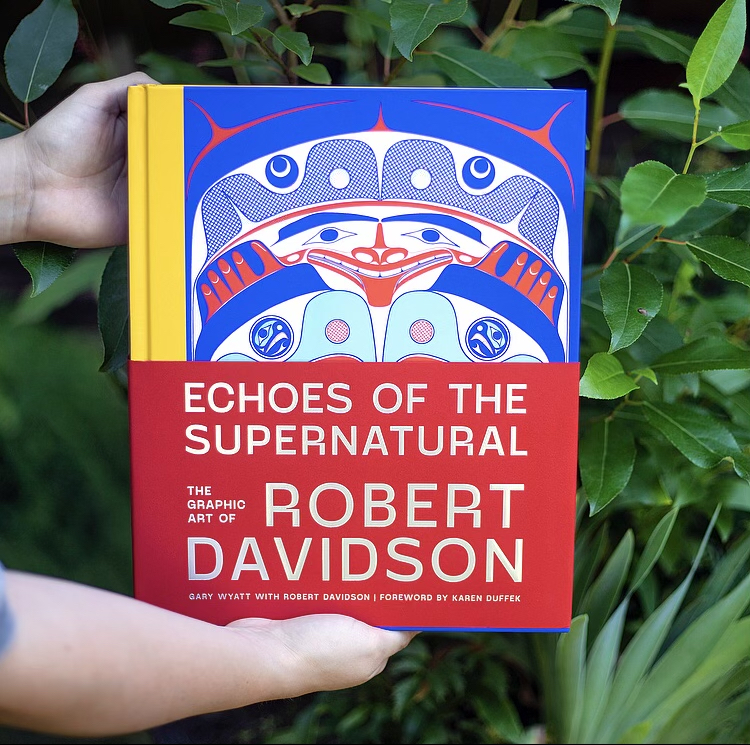 Excerpt: Robert Davidson His Life and Work from Echoes of the Supernatural

Celebrating the recent pub date of Echoes of the Supernatural: The Graphic Art of Robert Davidson by Gary Wyatt with Robert Davidson. In collaboration with Vancouver Art Gallery.

There is a photo of Robert Davidson in his studio that for many years was used as the cover of a portfolio that was presented to every client who bought his work. When other artists saw the photo they would comment not on the subject—smiling at the camera, wearing a bright, multicoloured shirt—but on the background, where a long line of chisels hang on a magnetic bar. If a level were placed under the chisels it would be perfectly straight, and there is no question that each of the chisels is razor sharp.

The studio is south of Vancouver, near the United States border. It is close enough to the amenities of the city, including art supplies, shipping, and a gallery network, and accessible for clients, but also distant enough from visitor traffic and interruptions—walk-ins are discouraged and appointments are necessary and screened. Davidson has thought often about returning to his home village of Old Massett on Haida Gwaii, where he has a second home, but here he can remain anonymous. In a small village he would need a very large coffee pot.

Whenever I visit there is a smell of cedar in the air, and woodsmoke from the stove; sometimes there is light music. The orderly studio is large enough for carving a totem pole, and has separate spaces for painting and storage. A separate office and a clean storage space are in a nearby building. Davidson spends a great deal of time alone or in the limited company of a few apprentices but he always dresses in bright colours, especially his socks, which sets his mood as an artist. He moves between painting and carving throughout the day, often taking advantage of the early morning hours to address the final details in his paintings and sculptures.

He keeps a binder with detailed sketches for future paintings and prints, all rendered in colour pencil. Scanning the book reveals potential new projects, but the pages also capture the first stages of completed paintings that are now hung on museum walls or in the homes of collectors. On the drawing table lies a painting in progress. There is always a painting in progress.

Davidson is among the most celebrated artists of his generation. He is especially renowned for totem poles and masks, which are equally present in both his ceremonial and fine art pieces, and he is universally considered one of the world’s greatest contemporary woodcarvers. His life and work have been the subject of numerous books, films, and major solo exhibitions. He has received every national and regional award that can be bestowed upon an artist, and he holds numerous honorary degrees and international acknowledgements. Closely connected to his art are his cultural, ceremonial, and environmental initiatives, which have helped the Haida Nation build a stable and sustainable future, and secured Davidson the respect of his nation, his peers, and the wider First Nations community. Over the past five decades, his commitment to Haida art at the highest level has led him to produce masterpieces in a variety of traditional and modern mediums—including sculpted wood, argillite, jewellery in precious metals, and bronze and aluminium sculpture—and what unites these efforts is the complex, two-dimensional painted design element known as formline, which continues to challenge his creative spirit as he works in the sixth decade of his career.

Excerpted from Echoes of the Supernatural: The Graphic Art of Robert Davidson. Copyright © 2022 by Gary Wyatt. Excerpted with permission from Figure 1 Publishing. All rights reserved. No part of this excerpt may be reproduced or reprinted without permission in writing from the publisher.