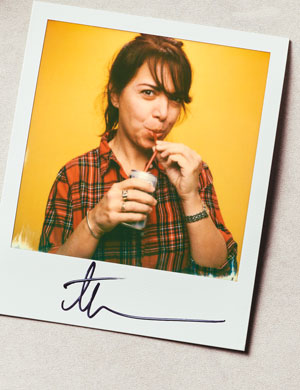 Amy Rosen is an award-winning journalist and cookbook author who writes regularly for publications such as enRoute, Food & Wine, and Food & Drink magazines. She is the former food editor at Chatelaine and House & Home magazines, has been a columnist for The Globe & Mail and National Post newspapers, and has been nominated for a James Beard award. Amy is the author of the bestseller Toronto Cooks and the newly released follow-up cookbook, Toronto Eats. She recently launched Rosen’s Cinnamon Buns.

I drink a glass of room temperature water, pull the shades open, watch the squirrels nimbly cross the power lines for a minute or so, then I go downstairs to pull an espresso and steam some milk.

Karen Von Hahn’s What Remains. It’s such a great memoir, and mimics my childhood in Toronto in the 1980s, though Karen definitely had a much fancier childhood.

There are no guilty pleasures. Just pleasurable pleasures. And that would be chocolate. It’s what I think about the most each day.

Lately, TV shows like Chopped, because I feel like they subconsciously push me to find a way to make the miss-matched ingredients in my fridge, like dukkah, roasted beets and halloumi, work.

Caraway seeds. They ruin everything.

The thing I love about Toronto is…

If I walk, north, south, east or west, within 10 minutes of my house I can sit down at a restaurant and eat the best meal I’ve had in ages, just about every night.